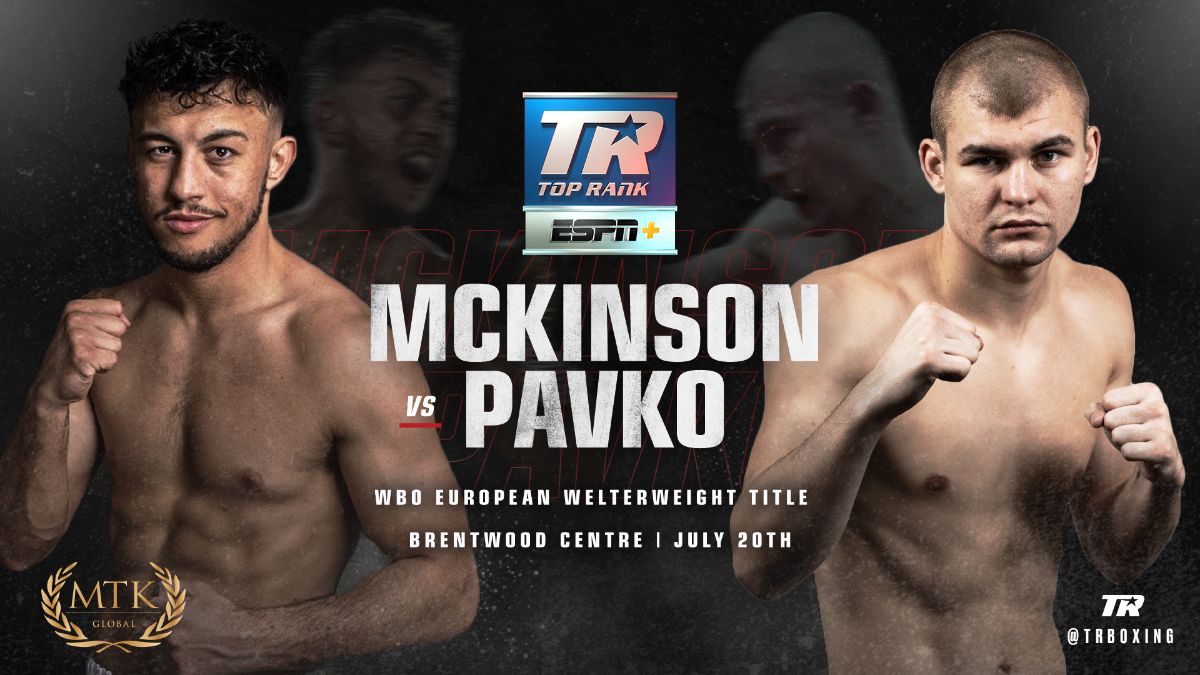 One of Great Britain’s most promising welterweights, Michael “The Problem” McKinson, is ready to conquer Europe. McKinson, a native of Portsmouth, England, will take on Russian veteran Evgeny Pavko in a 10-rounder for the vacant WBO European welterweight title on the latest edition of #MTKFightNight Saturday, July 20 from the Brentwood Centre in Brentwood, England.

“This is a good bout,” McKinson said. “Nobody in Britain wanted to fight me, so we’ve had to go the harder route and take on a dangerous Russian.”

McKinson (16-0, 2 KOs), a slick southpaw, is taking a step up in competition after winning both the WBC Youth and WBC International silver welterweight belts in less than five years as a professional. He last fought March 9 at the Brentwood Centre, outboxing Ryan Kelly over 10 rounds. Pavko (18-2-1, 13 KOs), from Kopeysk, Russia, is 2-0 since moving up from the super lightweight division. Unbeaten in three career fights outside of Russia, Pavko has not fought in seven months. Last December, he stopped the previously undefeated Fedor Vinogradov on cuts following the fifth round.

In other action scheduled for ESPN+:
Rising British welterweight prospect Shaquille “The Black Mexican” Day (12-0, 2 KOs) will fight countryman Louis Adolphe (10-1, 1 KO) in a 10-rounder for the vacant British Southern Area welterweight strap. Day has knocked out two of his last three opponents.

Former amateur star Chantelle Cameron (10-0, 7 KOs) will make her third ring appearance of 2019 versus Anisha Basheel (8-5, 8 KOs) in a 10-round WBC world title lightweight eliminator for the belt currently held by undisputed world champion Katie Taylor. Basheel has won eight straight fights by knockout since beginning her career 0-5 and is coming off a first-round stoppage over Sam “SJ” Smith for the vacant Commonwealth female lightweight title.
Thomas Patrick Ward (26-0, 4 KOs) will look to notch his second win of the year against Brayan Mairena (10-12-1, 4 KOs) in an eight-round featherweight tilt.