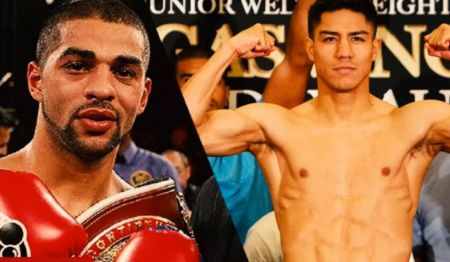 Welterweight contenders Sadam Ali and Jessie Vargas, both young, both experienced, and both highly confident, believe they have what it takes to claim a vacant world title when they fight on Saturday niHBOght (HBO, 10 ET/PT) at the DC Armory in Washington, D.C.

“I’m coming in with everything I’ve got, and I’m fully confident that I will come out victorious because of my preparation with my team,” said Vargas, a former junior welterweight titleholder.

Said Ali, “This is my chance. This is my shot. He had his. Well, he has another one. That’s good for him, but I’m ready. I’ve been working hard. I’m ready to show everybody why I deserve to be in this position. I’m the humble guy. I don’t like to talk. I do the talking in the ring. I’m ready to go out there get that WBO title and show everybody why I deserve to be where I am, and I will do that.”

To most, Ali-Vargas shapes up like a toss-up fight. Neither fighter seems to have any significant advantage over the other as they get ready to battle for the belt recently vacated by Timothy Bradley Jr., who elected to accept a third fight with Manny Pacquiao rather than a much-less lucrative fight with Ali, the mandatory challenger.

“It’s a 50/50 fight,” said Todd duBoef, president of Top Rank, which promotes Vargas. “Both guys are established and, obviously, Sadam Ali is trying to win his first title. To have both of these guys in the division creating some buzz and putting on great performances will make bigger fights for them.”

“I am going to bust up anyone who gets in my way on Saturday night. I am going to make a statement while winning this fight … We are not looking at this fight going to the scorecards.”   –Jessie Vargas

Vargas is usually a mild-mannered guy but he has something of a chip on his shoulder going into the fight. He is still steamed about how his last fight ended.

That was in June, when he challenged Bradley for the same 147-pound world title he will face Ali for. He nearly knocked Bradley out in the final seconds of the bout. However, Vargas felt like he was robbed of the chance to finish Bradley because referee Pat Russell mistook the clapper signaling 10-seconds left in the round as the final bell and stopped the fight with about seven seconds left. Vargas lost a clear unanimous decision but was understandably upset over the botched ending.

“I am still burned inside about what happened to me at the end of the Bradley fight,” Vargas said at Thursday’s final news conference. “I know I cannot change anything about that fight. But my manager Cameron Dunkin and Top Rank have given me a great new opportunity against Sadam Ali. It’s for the title belt that Bradley wore. I cannot wait to strap it on me in the ring Saturday night.

“I am going to bust up anyone who gets in my way on Saturday night. I am going to make a statement while winning this fight. I have a new team in my corner starting with my new chief trainer Dewey Cooper, who grew up with me. He has developed a technique which gives me more firepower. We are not looking at this fight going to the scorecards.”

Vargas won a secondary junior welterweight belt against Khabib Allakhverdiev by decision in 2014 and made two defenses, against then-unbeaten Anton Novikov and former lightweight titleholder Antonio DeMarco, before moving up in weight to challenge Bradley.

Unlike before those bouts, Vargas has been very aggressive toward Ali in his pre-fight talk.

“I’m planning on making Sadam Ali quit,” Vargas said. “That’s my goal and I plan to achieve it. I’m not going to stop pushing from beginning to end. I’ve conditioned myself. I’ve prepared myself to come in busy and not leave it up to the judges. Just win a clear, decisive fight.

“He’s not on my level and I’m here to show this on fight day. I’m here to prove that he’s not on my level. Of course, I’m saying it, but I’m going to prove it that night as well. It’s just two different breeds. He doesn’t have the experience I have. I’ve been in there with world-class fighters. I’ve beaten several undefeated records already, and I’m planning to do the same (Saturday).”

Vargas’ assessment of Ali’s career is bit off. Ali was a decorated amateur and 2008 U.S. Olympian and although his pro career has not moved a quickly as Vargas’, he had a coming out party two fights ago.

In November 2014, Ali knocked out highly regarded contender Luis Carlos Abregu in the ninth round of a major upset. It was a victory that catapulted Ali up the rankings and into the title picture. It was a win even Vargas was impressed by.

“I thought he fought well,” Vargas said. “He was a young fighter, and it was an opportunity. Abregu was a top fighter, but he had also been on a long layoff before then and he was an older fighter as well. Like I said before, he’s never experienced being in the ring with someone like me — young, hungry, strong, fast, in his prime. He did surprise me that he did stop Abregu. But credit to him for that.”

Then, in April 2015, Ali boxed in front of his hometown fans at Madison Square Garden in the co-feature of then-heavyweight champion Wladimir Klitschko’s defense against Bryant Jennings and put on an impressive performance in a lopsided decision against Francisco Santana. Then it took time to work out the title fight, especially with some uncertainty about whether Bradley would vacate or face Ali. All along, Oscar De La Hoya, CEO of Golden Boy Promotions, which represents Ali, said he believed Ali was ready to fight for a world title.

“So, look, Sadam Ali is at the perfect moment in his life where this is his year and this is the perfect time to shine. A lot of people, like Sadam said, underestimate his abilities and especially his power.”

Ali believes in himself as well and when told that Vargas said he would make him quit, he blew it off.

“This may piss him off, but it makes me laugh,” Ali said. “He’s really confident. That’s good. That’s the way a fighter should be. But make me quit? That is not an option for me.”

Ali said he was a little annoyed by the long layoff, since he has not fought since April. He and Vargas could have met for the interim belt in December, but issues over the site delayed it.

“It was a little frustrating, a little hard to get the fight going and figure out everything,” Ali said. “But I’ve been in the gym. I’ve been ready. I never took off and stayed out because I didn’t have a fight. So I’ve been ready.