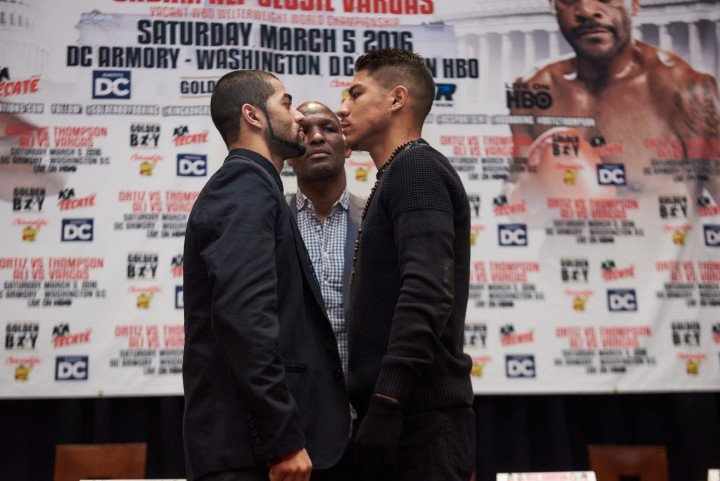 Vargas and Ali will be fighting for the WBO title that was vacated recently by Timothy Bradley. The Ali-Vargas fight is the co-feature bout on the Luis Ortiz vs. Tony Thompson card.

While the 27-year-old Ali is well deserving of a world title shot due to his unbeaten record and recent wins over Francisco Santana and Luis Carlos Abregu, you can’t say the same thing about Vargas.

Vargas, 26, was beaten by Bradley in his last fight in June of last year in a 12 round decision defeat. The World Boxing Organization is giving Vargas another shot at a title despite him having lost his last fight to Bradley while he was the WBO 147lb champion.

It’s not every day that a challenger gets back to back title shots at the WBO welterweight title without having to beat someone to earn a second shot. I guess the WBO is giving Vargas a break because of the controversial way his last fight against Bradley ended last June.

The referee stopped the fight with 10 seconds to go in the 12th round after he thought he had hurt the final bell. It wasn’t the final bell though. It was the 10 second clapper, and the premature stoppage robbed Vargas of a chance of finishing off a badly hurt Bradley, who Vargas had hurt with a right hand to the head moments before.

“We’ve had a great preparation. I am very happy to be fighting for the WBO World Title once again, and I look forward to becoming a world champion. I will do whatever I have to do to come out victorious,” Vargas said at the final press conference on Thursday.

“I am a stronger, faster and smarter fighter.” – @jessie_vargasJVon his fight against @realworldkidali on Saturday.

Vargas needs to throw more punches in this fight than he did against Bradley, because he wasn’t nearly as active as he should have been. Vargas just let Bradley dominate the action until the 12th round. It looked like Vargas wasn’t willing to let his hands go until he knew he was in the final round of the fight. By that point, he was hopelessly behind on the scorecards and needed a knockout to win. Vargas isn’t normally a big puncher, and that’s why it was a mistake on his part by not throwing a lot of punches in every round instead of just the 12th.

During the face off today, the 5’10” Vargas looked a lot taller than the 5’9” Ali. It looked like Vargas had more than an inch height advantage in the fight. However, Vargas being taller doesn’t mean he’s going to win the fight, because he was four inches taller than the 5’6” Braley, and he still got dominated for most of the fight.