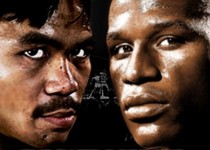 Manny Pacquiao could decide today or tomorrow whether he will fight Floyd Mayweather Jr. on May 5th — this according to Manny’s trainer.

Freddie Roach just told TMZ Manny and promoter Bob Arum are in the Philippines, figuring out if they can put off several deals to fight other boxers  … to clear the decks for a Mayweather fight in May.

Roach is scoffing at Mayweather’s tweet, in which he calls Pacquiao a “punk,” saying, “He should look in the mirror.  He’s been ducking us for 2 years.”

As for what weight class Pacquiao will fight Mayweather … Roach said 147 lbs — that’s the upper limit of welterweight.

Of course, even if Pacquiao can rearrange his schedule, both sides have to agree on a financial deal.  Roach says, “We’ll do it on even terms.”