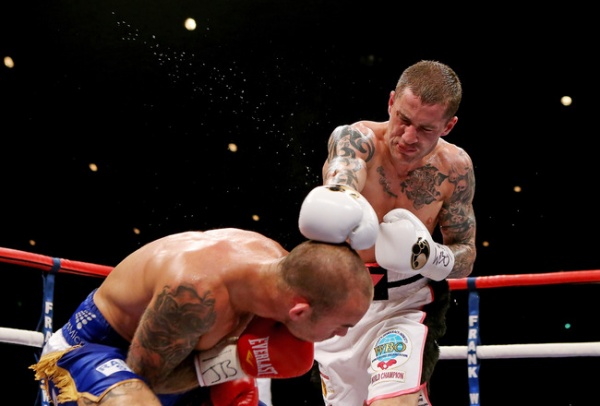 On May 11 in Glasgow, Scotland, WBO lightweight champion Ricky Burns will put his belt on the line against undefeated Puerto Rican contender Jose Gonzales. The Scottish Burns will be defending his title before an enthusiastic home crowd.

This is a classic matchup between a rising star with explosive potential and a crafty veteran who knows what it takes to win on the big stage. With Adrien Broner jumping to welterweight next month, Burns should be viewed as the top fighter in the world right now at 135. He’s coming off a Round 4 TKO of the big-hitting Kevin Mitchell, quite possibly the finest performance of his career to date.

The fight will be broadcast in the United Kingdom on Sky. The 30-year-old Burns will have the benefit of fighting in front of his home crowd, while Gonzalez fights outside of Puerto Rico for the first time in his professional career. Gonzalez’s KO ratio of over 70 percent is eye-opening, especially for a lightweight, but it was primarily accumulated against mediocre competition. Gonzalez has not only never fought outside of Puerto Rico, he’s also never fought anybody close to Burns’ level.

Gonzalez’s 73″ reach is impressive for a 5’8″ lightweight. Burns’ reach is average for a fighter of his height, but he gets the most of it by extending well and using his legs to move in and out of range. Although only a year separates them in age, the gap in experience is vast here. Burns has fought close to three times as many rounds.

There are two competing and equally compelling storylines in this fight. Ricky Burns is extremely popular in his native Scotland, and with good reason. He’s a grounded guy with a pleasant disposition. In the ring, he scraps with emotion and heart.

Burns is already being talked about as a serious candidate to go down in history as among the greatest Scottish boxers of all time. If you’re a Scottish fan, the storyline here is clear: “Our boy Ricky is going to knock off a big-punching, undefeated contender.”

Gonzalez has his own national pride to represent. When you consider the size of the overall population, the number of great boxing champions to come out of Puerto Rico is ridiculous.

Any time a young Puerto Rican fighter racks up the kind of record Gonzalez has, you are going to start hearing phrases like “the next Tito” being thrown around with breathless excitement. If Gonzalez can go to Scotland and knock off the top lightweight in the world, a new star will be born. Ricky Burns is a very large lightweight. His height and frame make him look closer to a welterweight, and the amount of work he must do to make the 135-pound limit no doubt contributes significantly to what is exceptional conditioning. He has a very deep gas tank and uses it to keep his legs moving all fight long.

Burns has been a professional since he was a teenager and has been fighting high-level competition since winning the super featherweight title from Ramon Martinez in 2010. He is a smart, relaxed fighter with grit, who stands up well to pressure and makes necessary adjustments during a fight.

Jose Gonzalez is a monster puncher. His knockout percentage is very high and many of them have come in spectacular fashion. Against journeyman Oscar Cuero, he connected with a body shot that forced Cuero to stand up straight, take a step back and then after a beat collapse to the canvas, finished for the night.

Fighters who know they can end things with a single punch bring an added layer of confidence with them into the ring. Gonzalez will need this, as he travels across the Atlantic to fight the much more experienced Burns, in front a crowd that will be wildly cheering every thing the Scotsman does.

Ricky Burns has only won 10 fights in his career by stoppage, giving him a knockout percentage of just over 25 percent. In his last fight against Kevin Mitchell, he managed to hit the Brit enough to stop him inside of four.

Most of Burns’ career until recently he has campaigned at 130. Like I wrote in the last slide, he’s big for a lightweight, so now that he’s stopped draining himself to junior lightweight, maybe his punches have more bang.

But he doesn’t have a track record as a big hitter, and against a guy who can pound like Gonzalez, that could make for a fine line to tread.

Jose Gonzalez hasn’t really faced a fighter who could seriously stand up to him up until now, so it is very hard to tell what his weaknesses might be. In the video I have watched of him, he comes straight forward without a lot of head movement. He’s right there to be hit, and a sturdy opponent who can hit and move and turn him at an angle might give him a lot of problems.

But it’s possible he has fought those other guys like that simply because he could. He may have more wrinkles to his game than he’s shown so far.

But his first time fighting away from his native Island, in front of a partisan crowd, is a heck of a time to have to find them. Burns will win if he keeps moving and doesn’t allow Gonzalez to cut off the ring. He needs to keep turning the challenger at angles, and he needs to hit him much more than he lets Gonzalez hit him.

Burns represents a huge step up in competition for Gonzalez, and he’ll be fighting for the first time in his career away from home. Burns needs to rattle his confidence early. He needs to frustrate him by making him miss and sting him with punches as he tries to cut off the ring.

Burns might not knock out a lot of opponents, but as he proved against Mitchell, he can hit hard enough to stop a world-class fighter if he keeps landing. He’ll need to maintain a high level of concentration against a banger like Gonzalez, but Burns has fought big punchers before and finished with his hand raised.

Gonzalez will win if he can manage to land on Burns with repeated flush shots. Burns is rugged and durable. He’s got a better chin than anybody Gonzalez has fought to date.

But Jose Gonzalez’s power is for real. He hasn’t fought truly high-quality opponents, but he’s been in there with seasoned pros and dropped them. Guys like that don’t just crumple up like paper unless they get hit with a legit shot.

To land that kind of shot against Burns, he is going to have to cut off the ring and trap him. He’s going to have to stay patient and not allow himself to get frustrated if Burns is managing to deflect or avoid his big punches early on.

For the most part, Gonzalez has been able to walk through people. He’s unlikely to do that against Burns. He’s probably going to lose rounds, maybe the majority of them.

So he’s going to have to keep believing in himself and his power while he waits for the chance to explode.

This is a tough one for me to come down on. Gonzalez has fought a relatively low level of competition, but the power he has displayed in those fights is hard not to take seriously.

In a sense, this reminds me of an HBO card I covered last year, which featured undefeated Puerto Rican welterweight Thomas Dulorme against Argentinian veteran Luis Abregu. Abregu cut him down and finished him in seven.

To be sure, Dulorme came in with far more hype than Gonzalez has generated. But there are similarities. Gonzalez is a hard-punching, undefeated phenom stepping up in competition to face an opponent who has been in with some of the top guys in the world.

Maybe it’s just because I am a middle-aged gym rat. But I am always inclined to come down on the side of experience.

I think Burns will be able to frustrate Gonzalez and break him down over the course of the fight. Burns can be hit, but he can take a punch and should be able to use enough movement to keep Gonzalez from landing much that is really flush.