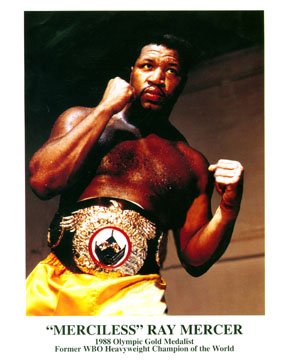 By Boxing Hall of Fame –

“From the Olympics to the professional ranks, Ray Mercer gave boxing fans plenty of memorable moments,” said Hall of Fame director Edward Brophy. “He’s a real fan favorite and we’re excited about him returning to Canastota for this year’s festivities.”

Mercer compiled an 85-6 amateur record and captured the 1988 Olympic heavyweight gold medal. He turned pro in 1989 and won the WBO title from Francesco Damiani in 1991 (KO 9). In his first defense he scored a dramatic 5th round TKO over Tommy “The Duke” Morrison. Stripped of the title in 1992, he went on to score wins over Tim Witherspoon and Darroll Wilson among others. Mercer’s pro record stands at 36-7-1 (26 KOs) and includes wins over Bert Cooper, Kimmuel Odum and Ossie Ocasio.

For more information on the Hall of Fame’s 24th Annual Induction Weekend please call (315) 697-7095, visit online at www.ibhof.com, on Facebook at www.facebook.com/InternationalBoxingHallofFame and on Twitter at www.twitter.com/BoxingHall.