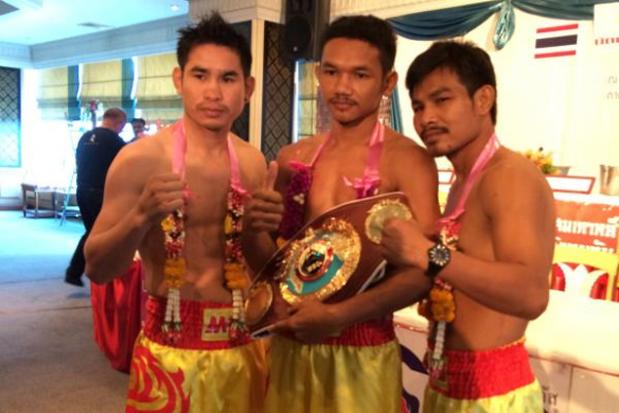 Pungluang Sor Singyu made no effort yesterday to conceal his unease and openly acknowledged that he was under pressure while readying himself for the fight against Japan’s Ryo Akaho for the vacant WBO bantamweight title in Ratchaburi on Aug 7.

Pungluang, a former WBO champion who is ranked second in the division, claimed that boxing in front of his fans in Ratchaburi would not give him any real advantage over his opponent but will rather put him under more pressure.

“I am feeling the pressure a lot,” he said. “Everyone is suggesting that I have to win the title here,” said the fighter, who has so far sparred more than 100 rounds to prepare for the title bout.

“As for Akaho, we have studied his fights carefully. He is classic and very fast. What I can say is that he is not an easy opponent to beat.”

Pungluang (50-3-0, 34KOs) stopped AJ Banal in the ninth round to win the vacant title in the Philippines in October 2012.

However, in his first defence, he lost to Paulus Ambunda in Namibia in March 2013.

His manager Pariyakorn Rattanasuban said she had invested a lot of money to get the fight to be held in the country, but she was concerned about Pungluang’s fitness.

“I just hope he will be in a great shape for the fight and will not disappoint us,” she said. “I made a mistake last time by making him defend his title in Namibia even though he was not fit enough at the time.”

Akaho, who holds a record of 26-1-2 with 18KOs, is challenging for a world title for the second time after losing to then-champion Yota Sator in a WBC flyweight championship bout in 2012. The WBO title has been vacated by Tomoki Kameda of Japan.

On the undercard, veteran Chonlatarn Piriyapinyo will compete in the featherweight division for the last time before moving up to the super-featherweight class.