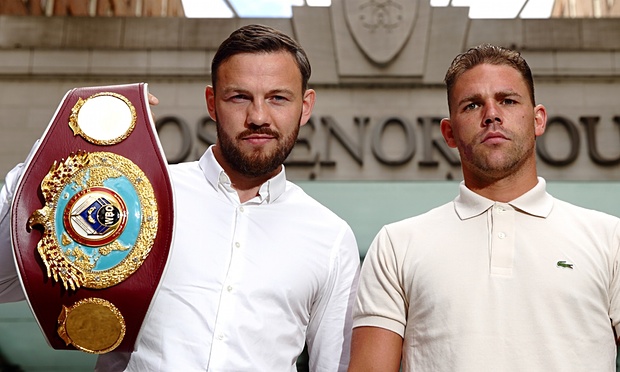 Andy Lee, left, and Billy Joe Saunders will fight for the WBO middleweight title in Limerick on 19 September in front of an expected crowd of 33,000. Photograph: Jordan Mansfield/Getty Images –

Andy “Irish” Lee is a travelling man in every sense, a proud member of his widespread roaming community and a fighter who has had to seek work in big and little towns all across the US and Europe, in near-empty halls and packed casinos, ballrooms and bars, in front of mugs and millionaires.

Now he is coming home, to Limerick, in front of an expected audience of 33,000 – an overwhelming majority of whom he will claim as allies – to defend his world middleweight title against fellow Traveller Billy Joe Saunders on 19 September.

This is the first fight between two Travellers for a legitimate world title and, when they shared a podium in London on Wednesday, the mutual respect and bonhomie was in stark contrast to the bogus trash-talking that characterises many of these face-offs.

It is, they agreed, for a real world title, with the unbeaten Saunders from a site in Hatfield the mandated No1 challenger and Lee the acclaimed 31-year-old champion who has been given no favours in a career of several ups and a few significant downs.

“We’re both in love with the game,” Saunders said. “For me it’s about walking away with that belt. But it is a huge fight for the Travelling community. Andy’s the first Traveller to win a world title. I’m the first to win a British title outright. There’s a lot of talk about this fight in our community. But it’s for the rest of the fans as well. But, yeah, it’s for bragging rights. It adds spice to it.”

Lee said: “I’d agree with that. And I’d say our upbringing and our background is the reason we’ve both been so successful. The pride we will bring to this fight is the pride we bring to every fight. As long as we both shall live we will have to face up [to the outcome] of this fight. Whoever wins will be hailed as hero. We’re both good men and the loser won’t be shamed but the loser will be known as the loser. There’s a lot on the line for us both.”

Until a year ago, when Lee found a finisher when getting battered on the ropes to level the knockout artist John Jackson in front of a stunned crowd at Madison Square Garden, Saunders had the higher profile, notably for his win over Chris Eubank. But Lee is the man with the belt that matters.

His journey has taken in Mannheim and Cologne in Germany, Esbjerg in Denmark, Detroit, Memphis, Las Vegas, New York, Michigan, Illinois, Connecticut, Indiana, Oklahoma, New Jersey, his adopted city of Dublin, Belfast – and now the rugby headquarters of Munster, Thomond Park, where he will walk to the ring with the blessing of the Ireland rugby captain, Paul O’Connell, a Limerick man, and the club’s “Stand Up And Fight” as his anthem.

“I’ve paid the price,” he says. “I’ve been all over. I’ve fought in I don’t know how many different countries.”

Lee has spent much of his career picking up the crumbs of others. “I only got the [Julio César Chávez Jr] fight because Martin Murray wasn’t allowed to travel to America,” he said, referring to a bout that was cancelled because Murray had been convicted of various offences in his youth.

“And I only got the [Matt] Korobov fight [when he stopped the Russian in six rounds to win the vacant WBO belt] because Billy Joe had signed to fight Eubank. But there here have been a lot of fights I should have got that other guys got.

“I’ve got to thank Adam Booth [his trainer and business partner] because, when we got together, we started to work on the contracts that I already had in place, with Lou DiBella and the management company I was working with then in America.

“I’m now in a position where I’m champion of the world and a partner in this fight with Adam. So I’m promoting my own world title fight in a huge stadium in my home town. I’ve come a long way.”