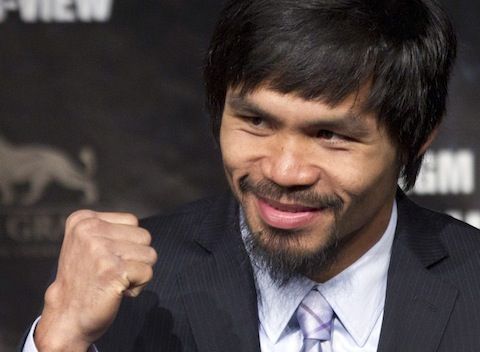 “I‘ve said this over and over before and I’m saying this again,I want Floyd Mayweather Jr. to be my next opponent and I haven’t changed my choice despite recent developments.”

Thus World Boxing Organization welterweight champion Manny Pacquiao declared by way of reacting to reports in media partly blaming him should the projected mega-fight not materialize.

“I am meeting with my promoter, Bob Arum on Tuesday and I will insist that the fight with Mayweather be given the preference than the four others in the list I will fight next,” Pacquiao told this writer in Tagalog in a long distance telephone conversation yesterday from General Santos City.

Asked where and what time his meeting with Arum, will be held, except to say that the American Hall of Fame promoter is arriving today .

“It’s not really fair for some quarters to blame me if, in the long run, the fight wouldn’t push through,” the 33-year-old RING MAGAZINE pound-for-pound best quipped. “As I have also been saying many times before, I fight for the fans. I want the fans to be happy always.”

“Whoever the fans want me to fight, I will face him atop the ring. I don’t choose fight. It is my promoter who does because it’s his job. My job is to fight, everybody must realize that,” Pacquiao, a lawmaker, a singer, movie actor, television host and a columnist, emphasized.

“Whoever says I’m ducking this fighter or that fighter, doesn’t know me, or just plainly wants to put me in bad light,” he surmised. “I never dodged from fighting anybody. If I did, I won’t be where I am now.”

The Pacquiao-Mayweather confrontation, the fight all of the boxing world wants to see, looked to have cleared of the impediments that aborted previous tries for it to materialize after Nevada Justice of the Peace Judge Melissa Saragosa deferred the unbeaten American welterweight 90-day incarceration she herself handed down shortly before year 2011 ended.
Statements coming from Arum though beclouded its realization in May as Mayweratherr himself wants leading every Tom, Dick and Harry to finger-pointing and blaming all those concerned, including the eight-division kingpin. The Harvard graduate Arum wants the Pacquiao-Mayweather showdown held in November instead.

One of the arguments Arum advanced was that since the fight could be biggest in the history of boxing in terms of economics, he wants the fight held in a bigger arena he’s proposing to be constructed in the sing city of Las Vegas rather than the MGM Grand the World Boxing 147-pound belt holder had, in fact, reserved.

“When Arum sits in the negotiation table, he will be laying on the table all the conditions we want, which , everybody knew already are simple. That I will abide by his demand for drug testing. I am even agreeable to get lesser purse just so the fight would push through,” he recalled. “In other words, as far as my side is concerned, there will be no problem.”

“We know, too, that Mayweather has no promoter. He negotiates by himself. So if the fight won’t be realized, it’s no longer because of me,” Pacquiao said.