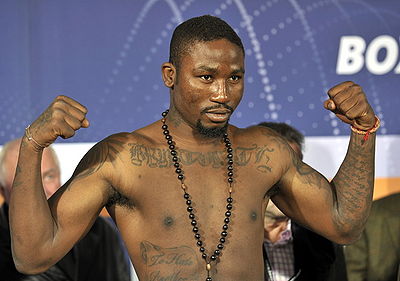 Former WBA interim-cruiserweight champion Valery Brudov (39-3, 28 KOs) will soon get another opportunity to capture a meaningful belt. Don King-promoted Brudov, 35, a native of Pskov, is set to fight hard-hitting and elusive (at the same time) Nigerian Ola Afolabi (18-2-3, 8 KOs) for the interim WBO title at 200-pounds. The fight is booked take place at ESPRIT Arena in Dusseldorf, Germany, as a part of the Wladimir Klitschko vs. Jean-Marc Mormeck undercard. Previously mentioned contenders BJ Flores and Latif Kayode have reportedly rejected a bout with Afolabi for various reasons.

Brudov is ranked #8 by the WBO and #14 by the WBA. His first attempt at a world title was nullified by the great Virgill Hill, who one-sidedly outpointed Brudov in January 2006. The Russian came back in December of the same year and stopped Panamanian Luis Andres Pineda to get the WBA interim belt. He lost it half a year later by dropping a close split decision to Germany-based Turk Firat Arslan. In his second world title opportunity, Brudov was stopped late by another Panamanian, Guillermo Jones; Brudov lost the fight via TKO 11 due to a bad cut. WBO #1 Ola Afolabi (also WBA #4 and WBC/IBF #7), 31, is also a former world champion. He came back to the ring in 2008 after a lengthy hiatus to stop highly touted prospect Eric Fields. A year later, Afolabi was trailing on judges’ scorecards up until the ninth-round of his fight with former WBO champion Enzo Maccarinelli, before he put the Welshman down for the count with a terrifying left hook, getting the WBO interim belt. He lost it several months later with a close decision to Marco Huck in a WBO unification. This time, K2-promoted Nigerian will get a crack at interim title.