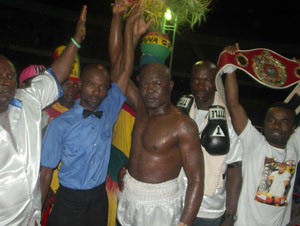 After successfully making a second defence of his WBO Africa Light Heavyweight belt, albeit controversially against Sweden based Ugandan Hamza Wandera, Braimah Kamoko has indicated his readiness to take on the big boys in the division in world boxing.

Banku claimed a 3rd round TKO to secure his win number 23 in 23 professional fights, but it was not without sweat. Wandera had boldly predicted beforehand that he was going to end the Ghanaian nicknamed Bukom Banku’s unbeaten record. Wandera served notice of his intention by scoring a knockdown of Kamoko in the very first round, the first time the Ghanaian showman had ever visited the canvas in his career.

But the unbeaten Bukom Banku bounced back in style and dominated Wandera for the rest of the fight until the Ugandan refused to continue fighting in the 3rd round following complaints that he had been fouled by the Ghanaian boxer. Referee Roger Barnor had no choice than to declare Kamoko the winner.

Even though Wandera has consequently declared his wish for a rematch with international referee and judges, Bukom Banku is less likely to pursue such option because the unbeaten Ghanaian is keen on becoming world champion.

“I’m not sitting down, I’m going forward. I’m going to fight (WBO Light heavyweight champ Nathan) Cleverly for world title. I’ve set a perfect record in my country, now I have to go international.
And I’m more than ready,” the highly eccentric Kamoko indicated after the fight.