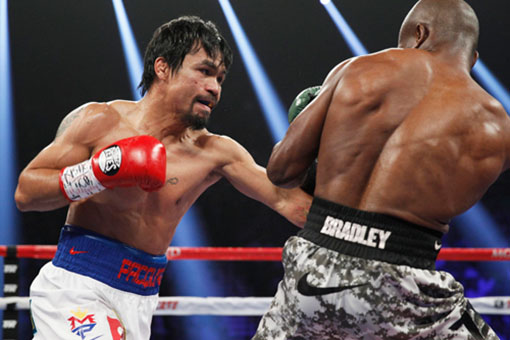 By:  Camille B. Naredo, ABS-CBNnews –

Reigning WBO welterweight champion Timothy Bradley Jr. said negotiations with the camp of Filipino ring icon Manny Pacquiao are still ongoing, amid reports that he had been selected as the Pacman’s opponent for his final fight in April 2016.

A report on The Mirror two weeks ago claimed that Pacquiao “rejected” British boxer Amir Khan and will instead face off against Bradley for the third time.

Bradley controversially defeated Pacquiao when they fought in June 2012, although Pacquiao got his revenge in their April 2014 rematch.

Bradley, however, told Dyan Castillejo of ABS-CBN News last weekend that nothing is set in stone yet. “We’re still negotiating,” he said.

He stressed that he would love to fight Pacquiao again, noting that the “Pacman” is “still one of the best fighters in the world.”

“I would love to (fight Pacquiao), but right now, we’re still negotiating. We’ll know something real soon, if we’ll do it or not,” Bradley said.

Bradley last fought on November 7, stopping Brandon Rios in the ninth round to defend his WBO welterweight championship.

It was Bradley’s first fight since hiring new trainer Teddy Atlas, and the boxer believes Atlas can be of great help to him should he wind up fighting Pacquiao in a trilogy bout.

“Manny is a tough guy. He always come prepared. He’s very durable, a very tough opponent, he’s one of the best in the world. He’s always tough,” Bradley said.

“But you know, with my new trainer, I feel that maybe I’ll be more prepared for what Manny brings, and we’ll come with a really good game plan to try to win the fight,” he added.

Pacquiao was supposed to announce who his opponent will be last weekend, during the Top Rank fight card in Puerto Rico that saw Nonito Donaire defeat Cesar Juarez via unanimous decision. The Filipino icon, however, delayed the announcement.