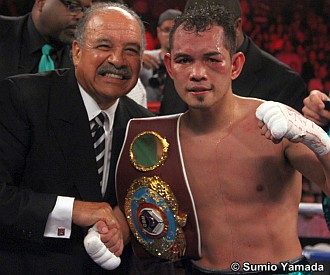 Filipino sportswriters praised Nonito “The Filipino Flash” Donaire for his unanimous decision win over Cesar Juarez of Mexico. But international sports scribes who may had seen Donaire as the winner, had varied reactions.

Jake Donovan of Boxing Scene appreciated Donaire’s efforts: “On this particular evening, there was minimal opportunity to seek the nearest exit. Had he done so, it would have been chalked up to Father Time catching up to him. Instead, Donaire dug deep and for the first time in an already incredible career was forced to persevere in an action-packed fight.”

Dan Rafael of ESPN also had a high score for the Filipino Flash : “ESPN.com also scored the fight 116-110 for Donaire, the 2012 consensus fighter of the year, who won his third fight in a row this year since returning to the 122-pound weight class. He dropped down in weight following a sixth-round knockout loss to Nicholas Walters that cost him his featherweight world title in October 2014.”

Chris Williams of Boxing News 24 picked Juarez as the winner: “I had Juarez winning the fight by a narrow margin because he clearly won rounds 7 through 12, and was robbed of a knockdown in the 10th, when he dropped Donaire with a left hook to the head. It’s unbelievable that Juarez didn’t get credit for knocking Donaire down in the 10th. It was just a really poor call by the referee because it was a left hook to the head that put Donaire down.”

Brian Mazique of Bleacher Report agreed with the judges: “Despite Juarez’s strong finish, the judges got it right. Donaire built a sizable lead early on, and he did more than enough to win the fight. That said, the 33-year-old still didn’t look as sharp as he did when he won Fighter of the Year in 2012.”

Scott Christ of Bad Left Hook scored a closer fight: “BLH had it slightly closer at 115-111 for Donaire…This was a massive test for him, not so much in skills but in desire, stamina, and heart. He proved out tonight, but how many more of these does he have in him, and is he still good enough to avoid this type of fight?”

Derek Bonnett of Seconds Out was not satisfied of Donaire’s win: “Nonito Donaire sought to re-establish himself as a world champion worthy of big-time boxing match-ups under the limelight. Donaire…did just that for about six rounds against Cesar Juarez…For the other six rounds, Donaire swelled, bled, tired, and clung to victory after injuring his ankle in a performance that can only be described as harmful to Donaire’s prospects of reclaiming a place among boxing’s elite.”

A rematch was called for and Donaire who appreciated the courage of his Mexican foe wanted to give him a return bout. Much credit must be given to Juarez who fought like a wounded tiger, a trademark for Mexican warriors.

But meanwhile, it’s so ecstatic for the nation to celebrate another champion coming home in the Yuletide Season.

CONGRATS NONITO! We are so proud if you!