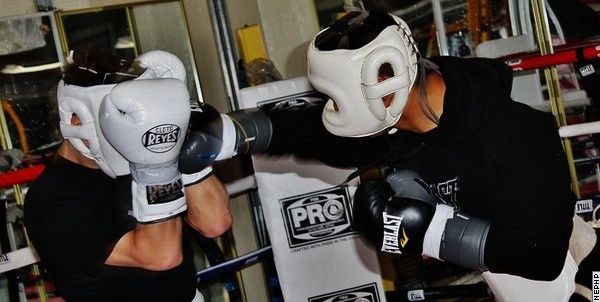 A recent swing through California saw me catch up and chronicle several fighters and boxing luminaries prepping for their next big assignments in one way or another.

This past weekend I paid a visit to the Two Feathers gym in Riverside as unbeaten featherweight Miguel ‘Mikey’ Garcia was putting in work for his March 10th Showtime date with former title challenger Bernabe Concepcion for the vacant WBO NABO Featherweight title, set to go down in San Juan, Puerto Rico.

And while I definitely felt the need to get back home, it was only fitting that I again paid a stop to the Two Feathers gym beforehand, as I heard Garcia was going to be putting in his final sparring before heading out to Puerto Rico this Tuesday.

On this day his older brother Robert would make the trek from his Oxnard bases with a pair of sparring partners for his young sibling, undefeated Russian-born featherweight Evgeny Gradovich and 23-year old lightweight prospect Javier ‘Pelos’ Garcia, who is also Garcia’s nephew.

Getting in on the action was another talented featherweight prospect, 3-0 Saul Rodriguez, a stable mate of Mikey’s.

No matter what pairing I watched, the sparring was very intense and competitive.

After the work was done I said my goodbyes, this Oxnard/Riverside crew being a particular favorite of mine to keep tabs on, and headed back home.

And while it was another whirlwind jaunt through Cali over those five days I find myself being grateful that I’m able to work so closely in a sport I love so much and can only hope my photos and interviews/stories do a bit of justice to the memorable time that was again had.

Photos and text by Chris Robinson