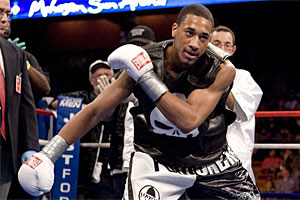 Andrade set to take on Ennis Andrade believes he has been unfairly tabbed a safety-first fighter. “Sometimes, it’s funny to me that, when I win by a decision, some people get mad because I didn’t knockout my opponent,” Andrade explained. “But they still get mad when I win by knockout. Whenever I fight, I bring a different look and nobody can say I don’t. I beat (Grady) Brewer with my jab and I went to (Saul) Duran’s body with power punches until he quit. Each and every fight, I’m better, stronger – stepping-up against better competition – and I’m still winning.”

Currently rated WBO #9, IBF #13, WBC #13, WBA #15, Andrade was a much decorated amateur who in 2007 became the first American since 1999 to capture a gold medal at the World Amateur Championships. “This fight will put me in a good position and let people know that I’m coming hard,” Andrade said. “I will be there soon (world champion) but I’m in no rush. I’ve been handled the right way. We’re following the game plan and picking the right fights. Once I get up to 20-0 or so, I’ll be ready to call out the big guys like (Canelo) Alvarez.

“I’ve improved a lot since I turned pro, mentally and physically. I’ve kept my head on straight, remained focused and have had no distractions at all – in or out of the ring. Physically, I’m in tip-top shape, able to handle whatever comes my way.”

IBF #9-rated Ennis is carrying on the rich tradition of other tough Philadelphia fighters before him such as Joey Giardello, Jeff Chandler, Bernie Briscoe and so many others from the City of Brotherly Love.

“I don’t know too much about Ennis other than his record and that he has a good style,” Demetrius remarked. “We’re looking to step-up and fight guys like him. We’re going to make this show rock. I’m going for a big win.”