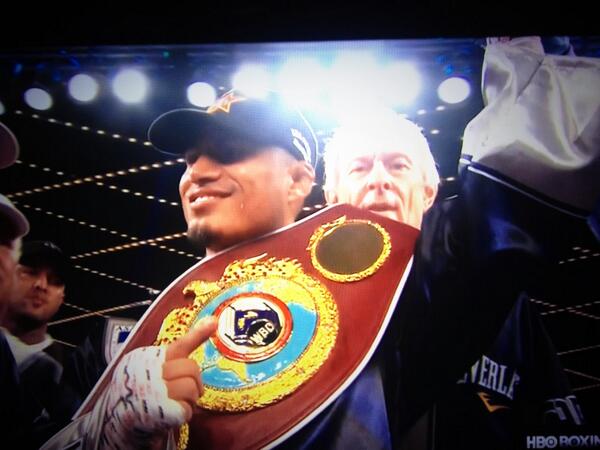 Tim Smith –  NEW YORK – Mikey Garcia had hoped for dynamite, but he had to settle for dominance as he pounded out a lopsided 12-round unanimous decision over Juan Carlos Burgos to retain the WBO junior lightweight title at the Theater at Madison Square Garden.

Garcia looked completely unmarked after the fight. He said it was not the type of fight that he expected. He expected fireworks from a hungry challenger.

“He wasn’t engaging like I thought he was going to do,” Garcia said. “He might have felt my power and respected that. He might have decided to box and try to come out with a decision.”

Once Garcia (34-0, 28 knockouts) got his rhythm going, he just walked Burgos down and came away with a very easy decision.

Much of the electricity had been drained from The Theater by the time Garcia and Burgos got to the ring. The place had been charged up by several Polish fans who came cheer for Artur Szpilka, who was stopped on a 10th round TKO by Bryant Jennings in the co-feature.

It was going to be up to Garcia and Burgos to re-energize the place. As they settled into a tactical boxing match with few fireworks, that seemed like an uphill battle. Garcia’s slow burn style is not conducive to the kind of instantaneous combustion the Garden boxing crowd craves.

But Burgos (30-2-2, 20 KOs) threw a brief thrill into the fans when he pulled a page from the Rocky Martinez playbook, landing a solid shot on Garcia’s chin that buckled his knees and sent the champion sailing backwards. But Garcia didn’t hit the deck like he did against Martinez. This time he steadied himself before his backside or gloves could touch the canvas, sparing himself a knockout. As he did against Martinez, Garcia remained poised and came back firing.

“It was a left hook,” Garcia said. “I caught him with a good right hand and he came back with a left hook. He wobbled me a little bit, but I wasn’t hurt.”

Burgos tried to press his height advantage. But he found it difficult to get inside of Garcia’s tight defense to land anything telling after that shot to the chin that nearly decked Garcia in the second round.  Meanwhile Garcia effectively used his jab as a range finder and landed his combinations with pinpoint accuracy. Garcia hurt Burgos in the third round with a body shot and that seemed to push Burgos into a more conservative mode.

“He probably felt my power and respected my power,” Garcia said. “I felt that as he was getting a little hurt he decided that he didn’t want to engage.”

By the seventh round Garcia was in full stalker mode, urged on by his brother and trainer, Robert. The constant pressure was draining Burgos and you could see him begin to wilt in the ring. Burgos punches had lost their snap and his feet were moving across the canvas as if there was lead in his shoes.

Entering the match, Garcia had called Burgos a dangerous fighter because the challenger from Tijuana, Mexico had come up short in his two previous world championship matches and had to deal with Garcia being considered one of the top boxers in the game. Burgos had fought to a draw against Martinez for the same title and in the same ring that he challenged Garcia on Saturday night. To add to the injury, Garcia had won a featherweight world title in the main event that night and went on to defeat Martinez by TKO for the junior lightweight title.

Garcia defused any danger that Burgos posed after that second round near knockdown. By the 10th round Burgos was as dangerous as a toothless tiger and in the end that world title had eluded him again.

“I feel good. We did a good job,” Burgos said. “I hurt him but he recovered well. He was prepared. I know I have to work harder. He has a lot of ability. He’s fast and strong. Luck was not with us tonight.”

Bob Arum, Garcia’s promoter at Top Rank, has an ambitious plan for Garcia, wanting to move him from 130 to 135 to 140 pounds and eventually up to 147 pounds to face Manny Pacquiao. Garcia said he is comfortable at 130 pounds – this was just his second match at the weight. And he probably should stay there for at least one more fight before considering moving up to lightweight.

Yuriorkis Gamboa made a cameo at the fight, even climbing into the ring after the fight with his promoter, Curtis “50 Cent” Jackson to press for a match with Garci. Garcia-Gamboa is an attractive match at 130 pounds. Now it’s a matter of whether it makes dollars and sense.

“Gamboa knows what to do. Sit down at the table and negotiate and if all parties can come to an agreement, then good,” Garcia said. “He can put on a pair of gloves and we can finish it right now. But it’s yet to be determined.”