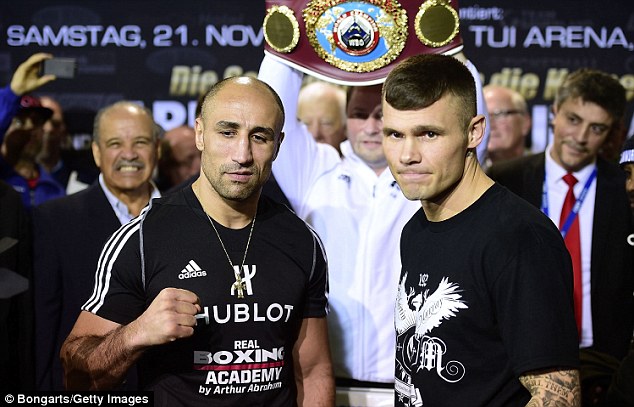 The 33-year-old (right) is greeted by fans following the weigh-in, which took place in Hannover, Germany

It is hard to think of any boxer more deserving of winning a world title than Martin Murray.

The hard man from St Helens is prepared to take on anyone, anywhere.

On Saturday night, he turns up in Hannover to challenge home favourite Arthur Abraham for the world super-middleweight title. This is the sportsman who never gets to play a home game when the major prizes are at stake.

The only three blotches on Murray’s record were inflicted abroad.

Earlier this year he bravely confronted the formidable Gennady Golovkin in Monaco and took the Kazakh KO merchant into the 11th round before succumbing to his only career stoppage.

Prior to that he knocked down Argentine great Sergio Martinez in Buenos Aires but still lost a razor-thin decision. That followed the robbery of the draw gifted to Felix Sturm in Murray’s first world title bid and since that injustice was perpetrated in Mannheim it is the result most relevant to this Saturday evening’s affair.

It is notoriously difficult for outsiders to secure a decision against German-based fighters in that country.

Murray shrugs, suggests it might be time to nickname himself ‘The Road Warrior’ and says: ‘I’ll fight anyone, anywhere but this time I hope the three judges realise the eyes of the world are upon them.’

He also believes Abraham has miscalculated in regarding this voluntary defence as a stepping stone to bigger championship unification fights next year. Abraham has won his last seven fight, his last defeat came against Robert Stieglitz in March 2013

Murray will be encouraged to know that Abraham is beginning to suspect as much himself.

King Arthur is now saying: ‘I realise that Murray is a good boxer who is going to give me a very tough fight. Once we got into camp we cranked up the training to the hardest I’ve ever been through. It was torture and became almost brutal. I knew I had to be in my best possible condition.’

Murray’s three previous world title fights were at middleweight and he says he feels stronger now he has moved up a division.

The question is whether he will still punch his weight.

Murray has never been the hardest hitter but has broken down most of his opponents by the cumulative effect of his consistent punching.

On this busy fight night, Murray will be the first into the ring of three Brits bidding for world titles.