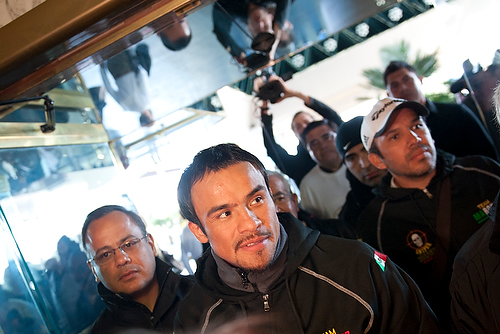 If WBO welterweight champ Manny Pacquiao is annoyed that Juan Manuel Marquez has constantly stated that he beat him in their first two meetings, imagine how Marquez feels knowing that he was a round away in both fights of being 2-0 rather than 0-1-1.

A reversal of fortune could have seen “Dinamita” sitting atop the pound-for-pound rankings and in possession of an even more celebrated career today than Pacquiao. It’s something that Marquez thinks about every single day of his boxing career. It pains him to watch Pacquiao be considered one of the greatest boxers of all-time; especially when he feels that he beat him when they met in 2004 and 2008. Yes, Marquez is 38-years-old and perhaps entering the twilight years of his career sooner than later. Yes, Marquez will come in with a size disadvantage as he hasn’t had as smooth of a ride up the scales as his counterpart has over the past few years. Yes, he’s been as much as a 9-1 underdog in Vegas. None of this matters to Marquez. All he wants is one last shot at Pacquiao to prove that he has his number. Nothing more, nothing less. This is personal.

“Without a doubt the fight is personal for me,” Marquez said on a recent conference call. “I didn’t get the two decisions I thought I won. I think I will win this fight because I should have won the first two.”

It wouldn’t be too farfetched to say that Marquez is right in his claims. Their first meeting in 2004 would have seen a drastically different outcome had it not been for the whirlwind of punches that sent Marquez to the canvas three times in the first round. The same can be said about the 2008 bout that saw Marquez go down in the 3rd round and proved to be the difference on the scorecards. This fight should finally settle the score.

“The first two fights were very close and this fight should end all doubt,” Marquez says. “We are not the only ones saying we won the fights. There are a lot of fans and media out there saying the same thing- that we won those two fights.”

And that whole age thing? That doesn’t worry Marquez one bit.

“I don’t believe age has anything to do with it. I prepare myself very well and I’m going to be just as good as I would have been a few years ago.”

Let’s all hope so because if the first two fights were any indication, this will be yet another barnburner.