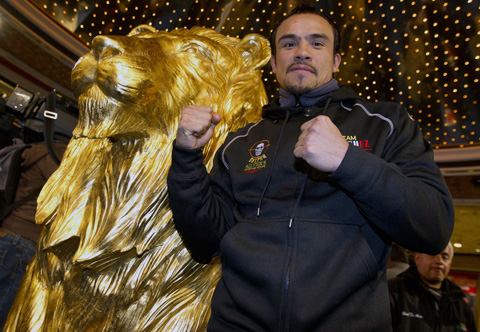 WBO/WBA lightweight champion Juan Manuel Marquez (53-6-1, 39KOs) has once again discussed his interest in facing WBO 140-pound champion Timothy Bradley (28-0, 12KOs). Marquez, who turns 39-years-old in August, is looking to retire by the end of 2012 and wants the best fights possible. The top priority is a fourth fight with WBO welterweight champion Manny Pacquiao, who won a twelve round majority decision over Marquez on November 16th.

If Pacquiao is unavailable, Marquez wants Bradley. He considers Bradley’s style as being more diffcult to overcome in comparison to Pacquiao, who the Mexican champion faced for 36 rounds.

“If it won’t be Pacquiao, then I want it to be Bradley. Erik Morales is a good fighter [at 140] but we want the best possible options there are.Bradley is the better option. He holds the best ranking [at 140] and he has a style that is more difficult than Pacquiao,” Marquez said.