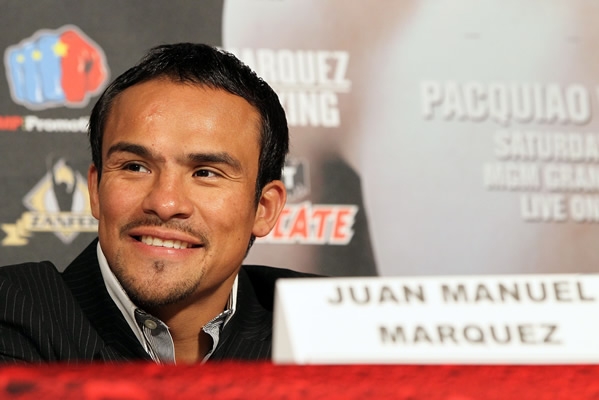 Top Rank’s CEO Bob Arum, and Zanfer Promotions President Fernando Beltran, are discussing the possibility of a fight between Juan Manuel Marquez (55-7-1, 40KOs) and Mike Alvarado, which is being targeted for May 17th at The Forum in Los Angeles, California. The co-feature would see a lightweight bout between Mikey Garcia and Yuriorkis Gamboa. Marquez lost a twelve round split decision to WBO welterweight champion Timothy Bradley in October, and then a week later Alvarado (34-2, 23KOs) was stopped by Ruslan Provodnikov.

“A few minutes ago I just spoke with Fernando Beltran [who handles Marquez]. Juan Manuel Marquez, maybe he will go against Mike Alvarado. And then the winner? Although not officially, [the winner] would face the winner of the rematch between Pacquiao and Bradley. This is what might happen here. We are thinking about [doing that fight] at the new Forum in Los Angeles,” Arum stated to Carlos Narvaez.