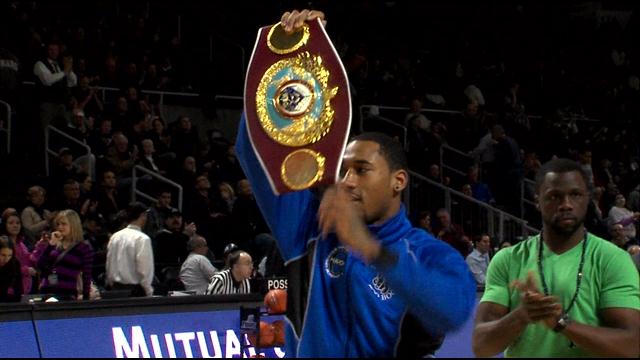 Not only does Andrade plan to succeed Floyd “Money” Mayweather, Jr. as boxing’s pound-for-pound champion and biggest draw, the slick southpaw hopes to fight Mayweather prior to “Money” closing his boxing bank, so to speak.

Andrade, a native of Providence who now lives in Atlanta, defeated previously unbeaten  2004 U.S. Olympian Vanes “Nightmare” Martirosyan (33-1-1, 21 KOs) by 12-round decision for the vacant WBO title last November on HBO. The 25-year-old is now required to make his first title defense, likely in April according to Andrade, against WBO No. 1-rated mandatory challenger Brian “The Lion” Rose (25-1-1, 7 KOs).

The 36-year-old Mayweather (45-0, 26 KOs) will face either Amir Khan or Marcus Maidana on May 3 in Las Vegas on Showtime PPV.  The nine-time, five-division world champion Mayweather is the reigning WBC and WBA Super junior middleweight title holder.

“I’m getting ready to take over boxing after Mayweather retires,” Andrade said.  “I want to match my natural, God-given skills against his before he hangs up his gloves for good. Let’s unify the titles, Floyd.  We can do it here in Atlanta, Las Vegas or New York. You pick the place, just don’t leave me hanging and retire without fighting me. This is my time!”

Mayweather announced that he will fight only four more times, including May 3, and then retire next year from the ring as a boxer. Andrade needs to quickly position himself as a viable opponent and rising star in order to be seriously considered as one of only three more Mayweather opponents.  A match-up between the two could be like the passing of the torch, assuming Andrade continues to develop in the ring and marketable product.

Andrade has been described by some as a younger, taller (by 5 inches), southpaw version of Mayweather because of their similar styles and tremendous boxing skills.  Their similarities don’t end there, however. They are both African-Americans who flash endearing smiles, in addition to being former US Olympians (Mayweather – 1996 Olympic bronze medalist, Andrade – 2008), multiple National Golden Gloves champions (Mayweather 1993, 1994 & 1996, Andrade 2006 & 2007), and two of the few undefeated professional prizefighters.  Andrade was also the 2007 World Championships gold medalist.

Is Mayweather vs. Andrade in the stars?  Stay tuned, boxing fans.