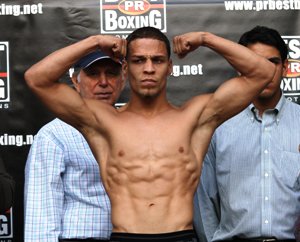 Manager and trainer Olrando Pinero is confident that his boxer, super bantamweight Jonathan Oquendo (22-2, 15KOs), will get the winner of Nonito Donaire-Wilfredo Vazquez Jr., taking place on February 4th in San Antonio, Texas. Donaire and Vazquez will battle for the vacant WBO title. Oquendo, the WBO Latino champion, is the mandatory challenger after winning an eliminator last October with a second round knockout of Jose Luis Araiza. Oquendo has been unbeaten with eight wins since losing to Juan Manuel Lopez in 2008.

“Oquendo will be active on the card where Juanma will fight for the world title [against Orlando Salido] on March 10 or 31. Vazquez and Nonito Donaire will fight on February 4 for the WBO super bantamweight crown. And I am confident that Jonathan, the WBO’s official challenger, will be next. The winner between Vazquez and Donaire will then fight Oquendo. He has the quality to be world champion,” Pinero said.