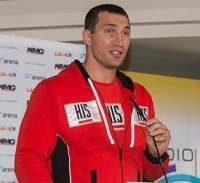 WBO/IBO/WBA/IBF heavyweight champion Wladimir Klitschko (61-3, 51KOs) has brushed off the trash talk from undefeated contender Tyson Fury (21-0, 15KOs). Fury recently lashed out at Klitschko, claiming the unified champ was ducking him and taking on poor opposition. Klitschko says his management have tried to secure Fury for several dates, but Fury’s team says the boxer is not ready for such a task.

“We’ve been asking Tyson Fury about the fight and his team keeps saying he’s not ready yet, I am not done yet. I am not sure if it was from him but definitely from his management team. I think that such a fight against Fury that if he will continue to be successful will happen and I feel kind also bad that this fight with Tyson Fury and David Haye didn’t work [out], because of the injury to David Haye, but I think it would of been an interesting fight,” Klitschko told On The Ropes Boxing Radio.