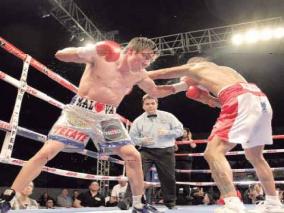 Jorge Arce: Do Not Count Me Out Against Nonito Donaire! WBO bantamweight champion Jorge Arce (60-6, 46KOs) has warned the critics to avoid counting him out in a possible September clash against Nonito Donaire (28-1, 18KOs), the WBO’s champion at super bantamweight.

Arce expects to land an undercard position on the Manny Pacquiao-Timothy Bradley pay-per-view, which takes place on June 9th at the MGM Grand in Las Vegas. And then he anticipates a clash with Donaire in September.

“Right now we are taking it step by step, fight by fight. We’ll [move on] to June 9 and then face Nonito Donaire in September – because that’s the fight I want,” Arce said. “A lot of people are leaving me for dead with Donaire, but I have to remind you that [I was viewed in the same light] against Yo-Sam Choi, Hussein Hussein and Wilfredo Vazquez – and you saw how those fights played out.”

“Boxing is about styles and moments. I think Donaire will beat Toshiaki Nishioka if they fight, because [Donaire] is younger and faster. We have seen flaws in Donaire and he showed them in the fight with Vazquez in San Antonio, and that’s where we plan to attack.”