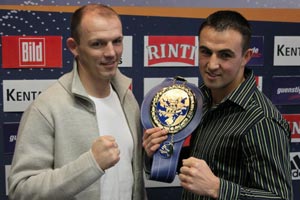 Eduard Gutknecht (24-1, 9 KOs) believes that Juergen Braehmer´s (38-2, 30 KOs) time is over. Today the current European Light Heavyweight Champion and his mandatory challenger met for the first time since the announcement of their upcoming clash in Berlin on February 2. The all-German affair will take place at the Max-Schmeling-Halle and the winner will not only be able to call himself the King of Europe but also gets a crack at the WBO World Championship.

It was the Champion himself who had the first word at today´s official press conference and he did not wait long to make his intentions clear. “I wanted to fight him years ago while we were still at Universum,” said Gutknecht. “Back then he was the European as well as the WBO World Champion. He was at the top of the game. But in my opinion he has already peaked a long time ago and his time in the spotlight is over. Of course, he wants another chance to get back to where he was. But I’m the champion now and I won’t give him that chance.”

Surprisingly his opponent of the night, Juergen Braehmer, did not really respond to that provocative statement. Instead, he decided to tell the media about his new training group headed by his old and new coach Karsten Roewer. “My preparations with Karsten Roewer, who I already worked with during my days as an amateur, are going really well,” said Braehmer. “I have a lot of fun with the other guys of the group and that is exactly what I need. Having fun while working hard motivates me.”

Gutknecht used that comment for another dig at the former champion. “I am not a joker. I take this sport seriously.” And his coach Ulli Wegner confirmed that there was not as much laughter in his camp. “We don’t have that much fun in my group – the guys can have fun during their spare time.”

Towards the end of the press conference, the challenger did make one thing clear. “When I am fully trained and in the right shape it is pretty much impossible to stop me. Once again, I have the chance to become to European Champion and after that the WBO World Champion. I will grab that opportunity with both hands.”