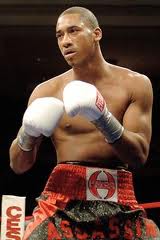 Ranked #3 by the IBF, #3 by the WBO and #7 by the World Boxing Council (WBC), the 24-year-old southpaw Andrade is an amateur sensation with extensive international experience. He was considered the cream of the 2008 United States Olympic Team advancing to the quarterfinal round. He also won the Gold Medal in the 2007 World Championships, the first American do so since 1999.

Andrade’s 2012 campaign demonstrated his brutal knock out power with devastating early knockout wins over Angel Hernandez (KO in Round 2),Rudy Cisneros (KO in Round 1), , and Alexis Hloros (TKO in Round 2)..

However, Hernandez is certainly the biggest challenge of Andrade’s career. The hard-hitting Hernandez has faced numerous former world champions and contenders over his 11-year career and holds recent wins over Luis Collazo, Mike Anchondo and DeMarcus Corley.

On October 15, 2011, Hernandez dominated former world champion Collazo towards a ten round unanimous decision win. Most recently he challenged top contender Erislandy Lara on June 30, coming up short in a hotly contested 10-round bout in Indio, CA.

“This is a fantastic opportunity for Demetrius to show the terrific fans at The Paramount and the ShoBox audience that he is deserving of his recognition as one of the best junior middleweights in the world. However, Hernandez is a tough, rugged fighter with a great deal of experience and is a true spoiler in the division,” said Joe DeGuardia of Star Boxing.

Stated Artie Pellulo of Banner Promotions, “We are very proud of Demetrius. This fight with Hernandez, which is a WBO Regional title fight is the next step towards a world championship.”

The Paramount is located at 370 New York Avenue, Huntington, New York, 11743. For directions and more information, please visit their website at www.paramountny.com