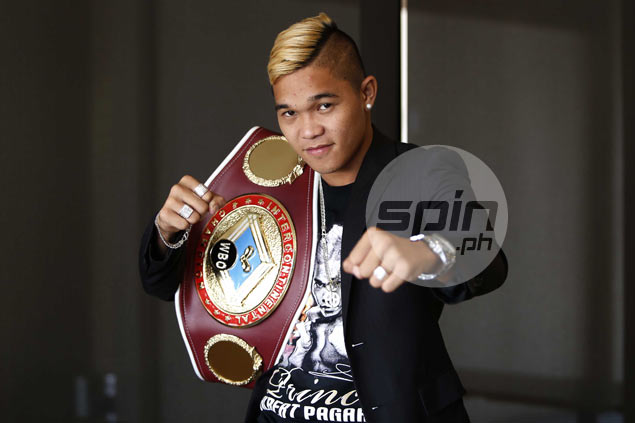 Albert Pagara is set to leave for his US training on Monday night.   Photo by:  Jerome Ascano

UNBEATEN Albert Pagara faces the toughest test of his young and promising career as he takes on durable Mexican Cesar Juarez in the main event of the ‘Pinoy Pride’ US edition this coming July.

The 22-year-old pride of Maasin, Leyte is well aware of the task at hand that he’ll be leaving for Los Angeles on Monday night to start training and get in shape for the 12-round super-bantamweight fight set on July 9 at the San Mateo Event Center in California.

But Pagara said he doesn’t fear his 24-year-old foe from Mexico City, who sports a 17-5 record, including 13 by KOs.

“Hindi ako takot sa kanya. Bakit naman tayo matatakot,” said the rising fighter from the ALA Promotions stable when he faced media men on Monday over lunch, just hours prior to his U.S. departure.

“Kaya natin yan,” added Pagara, whose unbeaten in 26 fights, 18 of which by KOs.

ALA Sports Promotions International Inc. president and CEO Michael Aldeguer is aware Juarez is a dangerous opponent for Pagara.

“This is the biggest test for Albert. We knew it would be a dangerous fight and a risk to his WBO No. 2 world ranking,” said Aldeguer in a statement.

“But again, just like (Mark) Magsayo, we need to find out if he has what it takes to be a world champion. Juarez gave Nonito Donaire one of the toughest fights in his career, so this should be another exciting fight. This will be a make or break for Albert.”

The younger of the two Pagara fighting brothers will be leaving for Los Angeles together with trainer Michael Domingo. They will be joined later by chief cornerman Edito Villamor shortly after Donnie Nietes’ defense of his WBO minimumweight title against Raul Garcia at La Salle Coliseum in Bacolod City on May 28.

It will be the first time Pagara will be in the US by his lonesome.