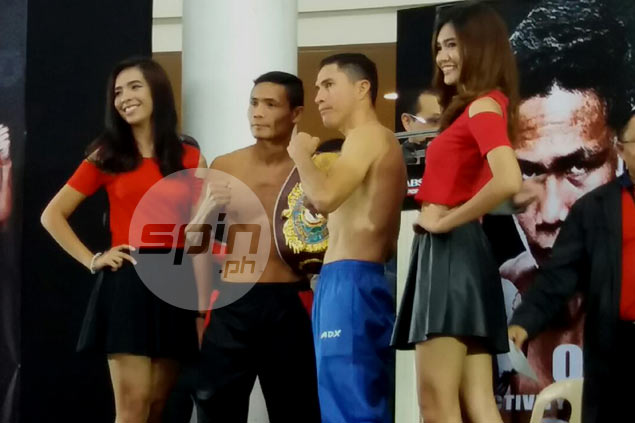 Donnie Nietes vows not to disappoint provincemates in his defense of his WBO title against Mexican Raul Garcia. Photo by:  Gerry Ramos

BACOLOD CITY – Donnie Nietes sees twin brothers Raul and Ramon Garcia as almost the same fighters. And it goes without saying he expects the same result for him when he stakes his World Boxing Organization (WBO) light-flyweight crown on the line.

The beloved son of Negros Occidental vowed not to disappoint against the cocky Raul Garcia in their 12-round title match at the La Salle Coliseum on Saturday night, almost five years since he beat the Mexican challenger’s sibling via a unanimous decision in exactly the same fight venue.

And unlike that 2011 championship bout in which Nietes, now 33, came close to going down in the last few rounds after losing steam in the stretch, he said the same won’t happen to him this time around.

“Grabe ang strength and conditioning na ginawa namin,” admitted Nietes after some carbo oading following the official weigh-in on Friday afternoon for Pinoy Pride 36: A Legend in the Making at the Robinson’s Place here.

That’s exactly what happened to him against Ramon Garcia Hirales, when he had to rely on heart and sheer will to survive the late onslaught by the Mexican to win his second world title which he holds until today.

Raul was at ringside that same night, and believes his brother did enough to win the fight.

“He remembers the fight very well. It was a very close fight, and he believes his brother should have won by one or two points, but the judges gave it to Nietes,” said one of Raul’s cornermen.

“Revenge is very much on his mind. Revenge for the honor of his brother and the honor of the country,” he added of the challenger, who also came in at 108 lbs for the main event of the boxing card put up by ALA Promotions and ABS-CBN Sports.

Raul trained almost five months for a shot at another world title in a second weight division, establishing his camp in a desert near Mexico City located 3,000 miles above sea level.

In all, the former WBO minimumweight champion (36-3-1, 22 KOs) worked 160 rounds of sparring to prepare for the bout.

“There’s no one who’s got balls than the Mexican fighters. if Donnie stays in the middle and fights like a man, he’s gonna knock him out,” said Garcia’s interpreter. “But Donnie will fight and run. So he’s ready for both, whether he runs or he stays in front of me.”

The pride of the municipality of Murcia, said he’ll be very patient this time unlike during his fight with Ramon Garcia before.

Once inside the ring, though, Raul said Nietes will realize he’s a different animal than his brother.

“My style and my brother is different,” said Garcia. “I’m very confident I’m gonna come out the winner.”

In the main undercard, Arthur Villanueva and Mexican Juan Jimenez both made weight for their WBO Asia-Pacific bantamweight championship fight. Villanueva tipped in at 117.5 lbs., while Jimenez was at 118 lbs.

Milan Melindo however, came in four lbs. over the weight limit for his flyweight match against another Mexican in Maximino Flores. The native of Cagayan de Oro City weighed 114 lbs. to the 110 of Flores, although camps of both fighters agreed to go on with the fight using bigger gloves, and possibly, a corresponding fine on Melindo.
www.spin.ph/boxing/news/donnie-nietes-sees-nothing-different-between-raul-garcia-and-twin-brother-ramon-predicts-to-retain-wbo-title#H5zbEdhwBFgwJI2b.99