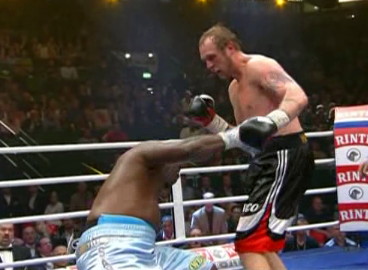 Helenius has good size at 6’6″ 240 lbs, and is hard to hit because of his long reach and ability to fight on the outside. He doesn’t hit as hard as the Klitschkos, but he’s got good enough power to worry any heavyweight in the division. It’s interesting that Wladimir and Vitali Klitschko haven’t gone after him yet, because he’s easily the best option available in the heavyweight division right now. He would be a very tough fight for either of the Klitschkos. Although I think they’re both too good for him right now, this could change in the near future if he continues to improve.

Liakhovich, 35, hasn’t done much since losing his World Boxing Organization title to Shannon Briggs in 2006. For some reason, Liakhovich has fought only three times since that defeat, losing another fight to Nikolay Valuev two years later in February 2008, and then beating a couple of B level fighters in Jeremy Bates and Evans Quinn to get to this fight. It goes without saying that Liahovich has really wasted a lot of time with his career. He easily should have fought at least 14 times since the loss to Briggs, and it’s mind boggling how much time and money he’s lost out on by being so inactive. At 35, it’s hard to see Liakhovich having much of an impact on the heavyweight division. However, it’s possible if he can somehow win this fight that he could find himself in against one of the Klitschko brothers to get a nice payday.

Helenius will probably be too big and powerful for the 6’4″ Liakhovich in this fight. It really depends on which Liakhovich shoves up for the fight. If he fights like he did in beating Lamon Brewster by a 12 round decision to capture the WBO title in April 2006, then I can see him possibly beating Helenius. However, if Liakhovich fights the same way he did against Valuev by fighting passively, then it’s going to be an easy win for Helenius.