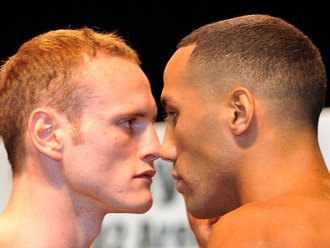 James DeGale will continue playing the pantomime villain if it sells tickets, but insists the act fails to reflect his true personality.

DeGale’s feud with super-middleweight rival and former amateur stablemate George Groves rages on with the fighters both renewing hostilities on Thursday.

They met at a press conference called to announce that they will both appear on Frank Warren’s bill at ExCeL London on December 9, facing as-yet unnamed opponents.

Eventually they are expected to meet for a second time in a professional ring – Warren wants to make the fight as soon as possible – when DeGale will seek to avenge the points defeat he suffered in May.

Groves won the popularity contest as well as prevailing in the ring and has seen his profile grow since that night at the O2 Arena.

Aware that he will always be cast as the bad guy, DeGale insists Groves brings out the worst in him.

“Anyone who’s not a boxing fan thinks I’m arrogant and too big for my boots,” said the European champion, who will be challenging for the WBO intercontinental title on December 9.

“It hurts me a little bit because everyone who meets and knows me sees that I’m a genuine and humble boy.

“But boxing needs this. It needs the rivalry and the personalities. People see me on TV and say ‘look at him, he’s arrogant’.

“But as long as people keep buying the tickets it doesn’t matter.

“It’s the role I’ll have to continue playing, especially with Groves, because I’ve been made out to be the villain.

“I read a letter in a magazine saying that I’m a control freak, and I couldn’t believe what I was reading. It was crazy.

“Sometimes part of me wants to go on a bit of a charm offensive. In my last fight I was humble and respectful.

“There’s real history there and it’s good for boxing. I feel confident around him, he doesn’t feel the same.

“You can feel the tension and it’s not coming from me, I’m cool with it.”

The enmity is based on personality as much as their rivalry in the ring.

The two are vastly different characters, DeGale noisy and self-assured yet affable in a way that is at odds with his public image, while the equally likeable Groves is more thoughtful and grounded, with a quick wit.

“I’m trying not to be the good guy. I reckon that if I went down the street kicking children I’d still be seen as the good guy!” he said.

“James is himself. You have to let him off the leash and be himself. Let people decide what sort of person he is.

“I just try to be myself, not a goody-two-shoes or a saint.

DeGale craves a rematch as early as possible, but Groves would rather wait to maximise the financial rewards.

“I want that cash cow (DeGale) to keep winning. He’ll be my pension fund one day,” said Groves.