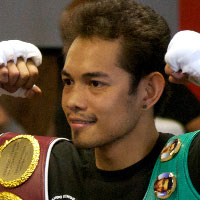 Nonito “The Filipino Flash” Donaire (26-1, 18 KOs), who faces Omar “El Huracán” Narvaez (35-0-2, 23 KOs) on Oct. 22 in New York City, said he’ll put on a performance that matches the city’s size and stature, and the venue’s prominence. “I’m ready to entertain as much as I did in my last fight,” he said during a teleconference to discuss the fight at Madison Square Garden, a venue he said matches the city’s stature. “My goal is to go out there and give everything.”

In his last fight, on Feb. 19, Donaire knocked out Fernando Montiel (46-3-2, 36KOs) with what his promoter Bob Arum said was “one most devastating punches I have ever seen.”

The big knockouts come from paying attention to the small things, said Donaire, the WBO and WBC bantamweight champion.

Narvaez, 36, is extremely smart in the ring, aggressive without being reckless, said Donaire, who fought a total of 17 rounds in his last four fights, all of which he won by knockout.

“He knows how to take a fight into the later rounds,” he said. “We’re ready.”

Robert Garcia, Donaire’s trainer, acknowledged that his fighter has height and reach advantages and said there would be a lot to be learned in the bout’s early stages.

“We’ll see what he’s got in the first few rounds,” Garcia said