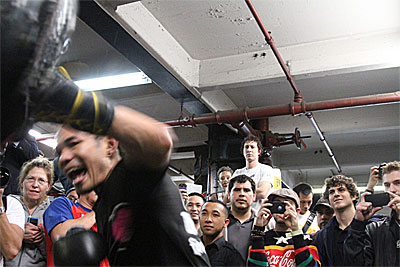 Donaire planning to stay at 122 for a while With a new test and weight class waiting for him to conquer, “The Filipino Flash” Nonito Donaire, Jr. stopped by dBoxing Source Radio show to discuss his rise in weights as well as his status as one of the top pound for pound boxers in the sport.

Asked about how he’s handling going up to 122 in camp thus far, Donaire welcomed the fact that he can eat more these days, but also admitted that he might have to stay at the weight for a little while as he intends to build up muscle weight and properly move up.

“I’m a taller guy for the lower weight class, but physically I’m lighter, because I’m skinny. So we’re just trying to build up a lot of muscle right now. I think I’ll be at 122 for a little bit. I’m struggling in creating more muscles and I’m working on that. To feel at home at 122 and 126, that’s something I need to work on as time goes by. Right now I’m looking at 122 as the most I’m going up until I can say that I can take care of these guys and then go up to 126,” Donaire said.

(Listen to this interview by clicking this link)

Staying at 122 to further establish his star isn’t a bad idea either with potential explosive match-ups against the likes of WBC champ Toshiaki Nishioka, newly crowned WBA champ Guillermo Rigondeaux and other names like Jorge Arce and Abner Mares who can easily move up to 122.

At the moment, however, Donaire is focused on the task as hand which is to win the WBO strap against its former owner Wilfedo Vazquez, Jr. at the Alamodome in San Antonio, Texas on Feb. 4.

“I’m the type to look at what’s in front of me. 122 is where I’m going to stand right now and see how I’m going to do with the stars at 122. If I can dominate like I dominated at 118, of course I want to challenge myself and move up to 126,” Donaire emphasized and added, “but  like I said, I am fighting Wilfredo Vazquez, Jr. who is a tough oppoenent, and that’s my only focus right now.”