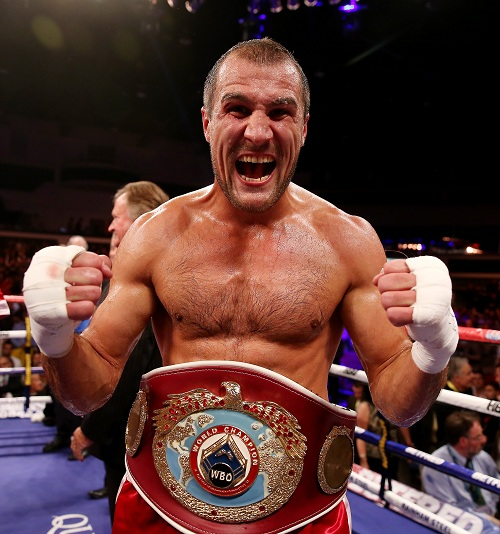 We won’t know for sure until March 29 if Cedric Agnew even belongs in the same ring with Sergey Kovalev.

It is clear, however, that the undefeated contender from Chicago isn’t short on confidence. He doesn’t think all the hype surrounding the ruthless Russian knockout artist is justified, either.

“I think he’s a pretty good, decent fighter,” Agnew said regarding the 12-round fight for Kovalev’s WBO light heavyweight title. “But I don’t see nothing spectacular coming from this guy. To me, my personal opinion, I just think he’s ordinary.”

The 30-year-old Kovalev’s knockout percentage is among the highest in boxing and he has become must-see TV over the past year. HBO will televise his fight against Agnew from Boardwalk Hall’s Adrian Phillips Ballroom in Atlantic City, despite that, on paper, it appears to be a mismatch.

For Agnew, 27, challenging Kovalev is the opportunity of a lifetime, a chance the former Chicago Golden Gloves champion couldn’t pass up. The most noteworthy name on Agnew’s record is former light heavyweight contender Yusaf Mack (31-7-2, 17 KOs), whom Agnew defeated by unanimous decision April 12 in New Buffalo, Mich. Agnew claims, though, that his lack of experience against championship-caliber opponents isn’t a concern.

“With Sergey Kovalev, it’s a great fight for us,” said Agnew, who stand 6-foot and fights right-handed. “We wouldn’t have took the fight if we didn’t think we could win the fight. With that being said, I don’t look at him like no terminator or anything. He’s a human, just like I am. He can be hurt, just like anyone else can be hurt. And come March 29, it will happen.”

While Kovalev (23-0-1, 21 KOs) almost always wins by knockout, Agnew has knocked out just 13 of his 26 opponents during a seven-year pro career.

When a reporter suggested to Agnew on the aforementioned conference call that it was Agnew, not Kovalev, that sounded overconfident, Agnew clarified his approach.

“Like everybody said, I’m under the radar. Not many people know too much about me. But come March 29, I feel like I have to make a statement. I have to. I’m not trying to sound overconfident or anything. I’m just saying what I have to do.”