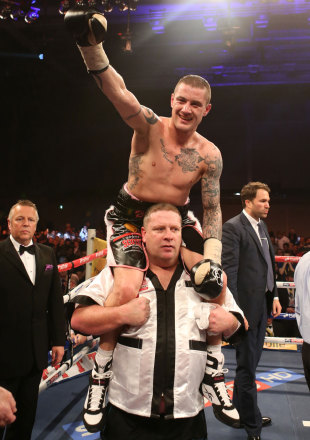 Ricky Burns successfully defended his WBO lightweight title after Jose Gonzalez retired at the end of the ninth round at the Emirates Arena in Glasgow.

The Scot made a third defence of his belt against the previously unbeaten boxer from Puerto Rico as the fight was called off just before the tenth round, with Gonzalez unable to continue as it appeared he had suffered a broken hand.

Burns could not find a way to break Gonzalez – who was fighting outside of Puerto Rico for the first time in his career – and had it not been for the injury he would have found it difficult to win without a knockout as Gonzalez had the upper hand over the rounds.

“I felt he was getting tired and I had to keep the pressure up,” Burns told Sky Sports after the fight. “I couldn’t believe how awkward he was. I felt like it was maybe a boring fight and I thought I should go to town a bit and I knew my corner didn’t like it. I could hear [trainer] Billy [Nelson] going off his nut.

“But I take my hat off to him [Gonzalez], he’s a class opponent and he caught with me with a few good shots.”

It was Gonzalez who threw the jabs in the opening round as Burns held back, and even at such an early stage the Scot started to get frustrated as his opponent made a confident start.

Burns enjoyed some success in the second round as the Scot was finally able to land a couple of punches on Gonzalez, but once again the man from Puerto Rico looked assured and relaxed as he slipped and slid one way and then another in the ring.

The crowd had been given nothing to cheer about yet, but they had something to shout about in the third round as Gonzalez absorbed a couple of Burns blows to his body.

Burns appeared to be the nervy challenger, and in the fifth round Gonzalez – who was boxing like the champion – was in control of the contest with Burns on the ropes.

Another round passed with Burns unable to make his mark, but he came alive in the seventh round, firstly escaping from the ropes after huge hits, and then responding with a few punches as both men exerted plenty of energy.

Gonzalez took his foot off the gas in the eighth round as he looked to be fatigued, and Burns produced his best round as the momentum began to shift to the home favourite. The ninth round belonged to Burns as well with Gonzalez not as light on his feet as he was at the start of the fight, and ready for the tenth round the fight was called off as Gonzalez apparently had a broken hand and could not continue with the bout.