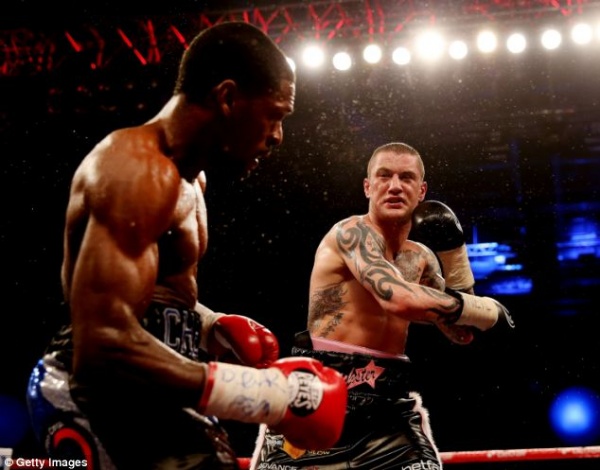 Ricky Burns retained his WBO lightweight title after Jose Gonzalez stayed on his stool at the end of the ninth round in a dramatic night at the Emirates Arena in Glasgow.

The 29-year-old mandatory challenger from Puerto Rico went into the fight unbeaten in 22 fights with 17 of them won inside the distance but an injury – with the suggestion it was a broken wrist – scuppered his chances of an upset.

Burns survived a seventh round in which he took some punishment and although he came back after that he was behind on points when the fight came to an early finish. Winner:  Burns came away victorious after a pulsating battle in Glasgow

The 30-year-old, making his third title defence, started cautiously, using his left jab to get his range.

Encouraged by the raucous crowd, the Coatbridge champion commanded the centre of the ring, pressing his opponent back albeit some wild swings missed the target.

Burns looked the more powerful, snapping his left-hand out to make sure Gonzalez kept on the back foot.

The third round witnessed more and better exchanges between the two fighters with a trickle of blood appearing on Burns’ nose.

The crowd got excited when their favorite had the challenger on the ropes but it was all too fleeting to do too much damage.

The chanting started again as the crowd urged Burns forward, not that he needed much persuasion.

He took a right-hand flush on the face in the fourth round but came back with a couple of powerful body shots.

Some fierce blows were traded but Burns still looked in control, emerging from clinches with little damage done.

Gonzalez appeared game but his lack of experience made him vulnerable at times.

Against that, he indicated with some good powerful punches, some that Burns had to take, why his knockout record was so impressive.

The Scot got caught with a stinging left hand at the start of the sixth round which brought him charging towards Gonzalez in some anger, but still he could not quite pin him down.

The Puerto Rican was changing attack hand at regular intervals and he wobbled Burns with a right hand in the a remarkably brutal seventh round from which the champion was lucky to escape.

Burns came out at the start of the next round determined to get back on top, as the slightly nervous crowd bayed for their man to regain control.

It looked like the champion’s head had cleared but he flew into Gonzalez swinging wildly at times.

The challenger was on the back foot for most of the ninth round, looking like he may have lost his chance to create an upset.

But there was unforeseen drama when Gonzalez failed to come out for the 10th round, which sparked scenes of celebration in the Burns camp.