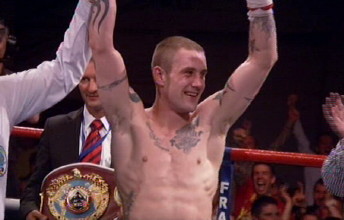 Burns, 28, is an unlikely person to be knocking out a tough fighter like Moses. Burns is going to have problems enough just trying to beat Moses, let alone knock him out like Nelson is predicting.

Nelson told the heraldscotland.com “Moses is a very good fighter. His style is completely different to [Michael] Katsidis, but world class fighters have the ability to adapt and I expect Ricky to stop him.”

So the light hitting Burns is going to stop a hard hitter like Moses, eh?

Is Nelson serious about that or what? Burns hasn’t had what you’d call genuine knockout since he stopped Michael Gomez in the 7th round in March 2009. I know Burns got a 1st round knockout credit for his fight with Nicky Cook last year in July when Cook’s back seized up on him in the first seconds of the fight in what turned out to be one of the funniest and worst match-ups I’ve ever seen before.

But Burns is hardly a knockout puncher and if he tries to punch with Moses, he’s going to be playing directly into his hands and will be making it too easy for him to stop Burns and take his precision interim strap. I figure Moses will win anyway by knockout but Burns will make it all the easier if he tries to follow Nelson’s instructions by shooting for a knockout over Moses.

I think Burns and Nelson haven’t see Moses fight and don’t realize what a great left hook and jab this guy has got. Moses can really punch and has got excellent hand speed and size. Moses, 5’8”, isn’t as tall as the 5’10” Burns but he’s got a 2 ½” reach advantage over the Scottish Burns, so he might as well be the taller man.