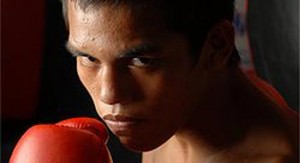 Melindo gears up for fight vs Esquer at Waterfront CEBU CITY—Even the holiday season and the recent Sinulog festival did not stop unbeaten Milan Melindo from preparing for his Jan. 28 fight against Mexican Juan Esquer.

“I trained continuously. I shouldn’t be complacent,” said Melindo, who resisted the temptation of eating too much during the holidays, in Filipino.

Melindo’s training is now in its final phase at the ALA boxing gym here as he gears up for his 12-round bout against Esquer, the main event of “Pinoy Pride XI: Philippines vs The World” to be held at Cebu City Waterfront Hotel and Casino.

Melindo, a 23-year-old native of Cagayan de Oro, will be bringing with him an unbeaten record of 25-0 (with 9 KOs) when he meets his 25-year-old opponent from Sonora, Mexico.

Esquer has a 27-9 (win-loss) record, including 21 knockouts, and once challenged for the World Boxing Organization light flyweight title against Ivan Calderon of Puerto Rico, losing a unanimous 12-round decision.

As part of the promotional built up for the fight presented by Ala Promotions and ABS-CBN Sports, Melindo and other boxers seeing action in the undercards, conducted a public workout at the SM City here Friday afternoon. Also in attendance were Lorenzo Villanueva, Joseph Von Minoza, reigning Orient Pacific Boxing Federation champion Merlito Sabilo and Mhar Jhun Makahilig.