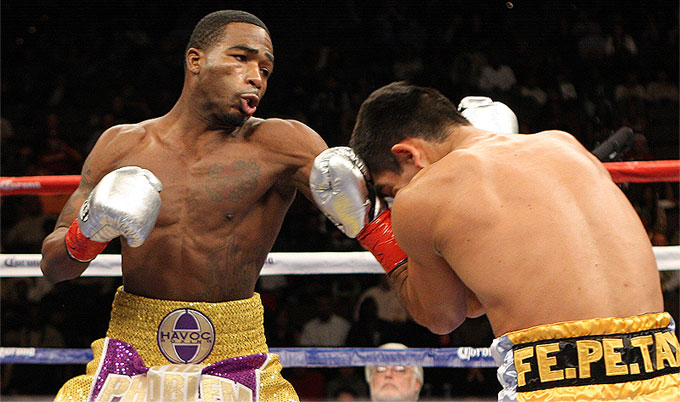 Broner: Fighting Rios Would Be Best Night Of My Career The Boxing Lab show welcomed newly crowned WBO super featherweight champion Adrien “The Problem” Broner (22-0) to their most recent edition of Boxingscene.com’s official audio show.  Fighting in front of his hometown fans in Cincinnati, Broner knocked out Vicente Martin Rodriguez (34-3-1) in the third round of their title fight that took place this past Saturday.
The super featherweight division is void of star power.  Broner’s weight class is sandwiched between the featherweight division which features fighters such as Yuriorkis Gamboa, Juan Manuel Lopez, Chris John and Orlando Salido and the lightweight division that has name fighters like Brandon Rios, Juan Manuel Lopez (if he moves back down in weight) and Erik Morales who informed the The Boxing Lab that he is going to drop down in weight.
Broner said that getting down to the super featherweight limit isn’t hard for him and that he could make featherweight if need be.  The Cincinnati native said that he would prefer to move up in weight versus moving down.
“I make 130 easy. I was eating steak and potatoes and I still made weight easy,” said Broner.  “I could go down but why?  I would rather fight where I am comfortable or I could move up to 135 or 140. I would definitely rather move up than move down.”
Lightweight kingpin Brandon Rios would probably be the biggest challenge between 126-135 that Broner could possibly face.  Broner praised Rios but said that he and his team would be able to come up with a plan to ensure victory over the undefeated Mexican-American brawler.
“Fighting Brandon Rios would be fun. That would be a fun night. Probably one of the best nights of my career. He is great. He is rugged and he brings a lot of power. If that fight were to happen I would have a game plan for him and I would show the world how I would handle him too.”