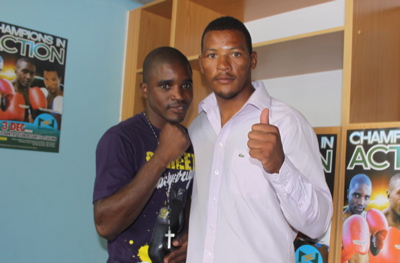 Immanuel “The Prince” Naidjala will be the main bout on Saturday when he faces South African Nkubela Gwezela at the Windhoek Country Club.

The WBO Africa bantamweight interim champion has been busy this year and this will be his fifth bout of the year.

He is still unbeaten after 11 fights. The Namibian who has seven knockouts under his belt, beat Emmanuel Simbeye from Zambia on a fifth round knockout in his last fight.

Naidjala might have a hard battle against Gwezela who has a record of 29 fights with 20 wins.

The 32-year-old South African who is nicknamed The Destroyer lost his last fight against Siviwe Hasheni on a split decision in East London in June this year.

In the fight preceding the main bout, Former WBO Africa lightweight champion, Vikapita Meroro will fight Victor Moyo from Zimbabwe in a catchweight fight with an 87kg limit.

In his last fight, Meroro lost to Braimah Kamoko of Ghana by unanimous decision in Accra, Ghana in June.

Before that, he had lost his WBO Africa light heavyweight title to Isaac Chilemba in South Africa in March by unanimous decision.

Meroro and Moyo met once before in March 2009 when Meroro knocked out Moyo in the second round.

In another catchweight (limit 62.23kg) fight on the same evening, Peter Malakia will face off against Silas Mandeya of Zimbabwe.

Another boxer who is quickly making inroads on the local boxing scene, Anthony Jaarman (6f, 6w) will fight Zimbabwean Bhekimpilo Mlilo (7f, 3w, 4l) in a welterweight bout over 4 rounds.

Matthias Chimbi (2f, 2w) will go up against Immanuel Andeleki who will be making his professional debut on the evening. The lightweight bout will be fought over 4 rounds.

In a junior welterweight bout, Lukas Handivele and Jason Mashela will both make their professional debut in a 4 round encounter.

Elias Nashivela will make his pro debut against Thomas Shangula (1f, 1l) in a catchweight fight over four rounds in the first fight of the evening.

Tickets to the fight will cost N$100 while a table at ringside that seats 10 people will cost N$10 000. Tickets are available at the Boxing Control Board office.