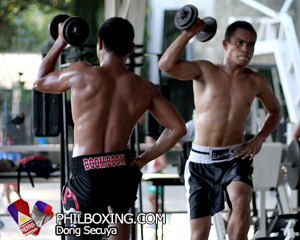 As though the battle for the vacant WBO bantamweight title between No.1 ranked AJ “Bazooka” Banal and No.2 ranked Pungluang Sor Singyu of Thailand isn’t attractive enough, famed ALA Promotions has put together a blockbuster undercard for the October 20 “Pinoy Pride XVII” at the MOA Arena on Roxas Boulevard.

Banal and Pungluang both promised fireworks on fight night with the tough Thai fighter who has disposed of 16 Filipino opponents including such talented boxers as Eden Sonsona and Marvin Tampus predicting he would knock out Banal in four rounds.

Appearing on a pre-fight special taped at the studios of ABS-CBN, Banal shot back that he will KO Pungluang in three rounds before both protagonists agreed to let their fists do the talking in the ring on October 20 and allow the predictions to stand until then.

Bautista (33-2, 25 KO’s) who is coming off a farce of a fight against a fake Genaro Garcia whom he knocked out in the 2nd round last March 3 is the reigning IBF International 126 pound champion having won nthe title with a 6th round knockout of Miguel Angel Mendoza on December 10, 2011.

In his last fight on May 18 this year Ruiz lost a bizarre 8th round technical decision in an IBO super featherweight title fight to Australia’s Will Tomlinson when the lights went out at the Melbourne Pavilion and since power was not restored, officials decided to award the fight to the Aussie on the basis of the scorecards at the end of the 8th round.

Pagara (29-2, 18 KO’s) is coming off a crushing 6th round TKO victory in a rematch with rugged Mexican veteran Rosbel Montoya last August 18 to win the vacant WBO International title in which he dropped Montoya three times, the last a devastating shot to his upper arm which didn’t allow the Mexican to continue because of severe pain.

Pagara will go up against the undefeated Antoine (17-0-1, 9 KO’s) who won the vacant Commonwealth Zonal title with a ten round unanimous decision over undefeated Mark Austin on February 25, 2011 after which he won the vacant WBC Caribbean Boxing Federation lightweight title with a twelve round unanimous decision over Revlon Lake on February 25, 2012.