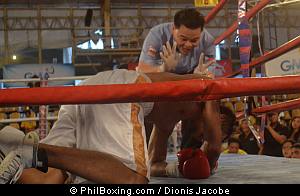 Fredirex Rodriguez (9-2-1, 7 KO’s) of Bukidnon was successful in his attempt to grab the vacant WBO Asia-Pacific Bantamweight by knocking out Vencent “Popeye” Palicte (14-4-1, 7 KO’s) at 2:59 mark in the fifth round when Referee Atty. Danrex Tapdasan reached the count of ten.

The two young fighters traded blows in the first four rounds when the more experienced and favored Palicte appeared to run out of gas in the fifth round when Rodriguez landed body blows that shocked Palicte. To preserve his strength, Palicte tried to wrestle Rodriguez sending both of them to the canvass. But, when the fight was reset, Rodriguez landed a blinding solid right hook sending Palicte to the canvass, which prompted the lawyer Referee to start counting until he reached the count of ten. 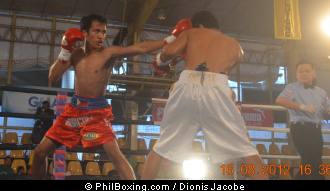 Rodriguez connects with a left on Palicte. 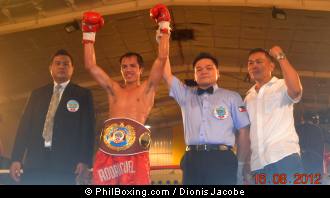