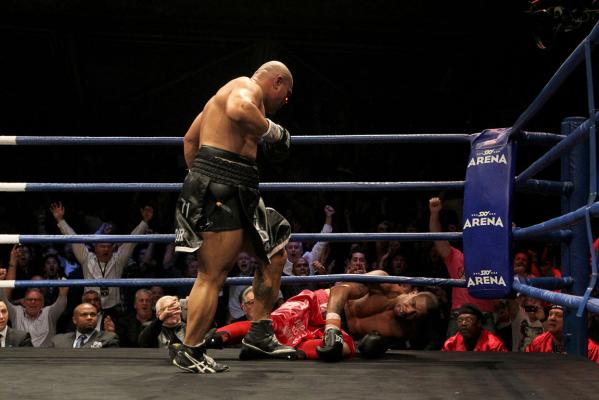 On his home patch in South Auckland, with blood and a smirk splattered on his face, David Tua was shocked when his return to the heavyweight division was quashed tonight with American Monte Barrett awarded a unanimous point’s decision.

Barrett is the only man to knock Tua to the canvas and appeared to be out on his feet in the last rounds.

He was knocked down in the 12th and struggled to get up but must have done enough in the early rounds to convince the judges.

The sold out crowd’s raptures turned to stunned glances when the decision was announced. They thought their Samoan-born Kiwi had his redemption revenge.

Tua bided his time and picked his moments, slowly building his power and intent as the bout progressed, but wit the loss, just the fourth of his career, means he gives up the WBO Asia Pacific and Oriental belts. The 38-year-old said he would not retire but will take time out to consider his credible future in the sport.

Barrett kept the initially inactive and sluggish Tua at bay with his reach advantage and left jabs in the first three rounds. With a flurry of punches and his go-to overhand right hook bearing down, Barrett had Tua bleeding from a small cut above his right eye. The visitor was well on top, but briefly.

Tua was patient. He waited for an opening, a weakness in Barrett’s defence. The infamous left hook made a belated appearance at the end of the fourth round, as he lifted.

But Tua began to consistently rock the 40-year-old New Yorker with powerful combinations and a busier work rate. Barrett slipped behind in the points as the fight changed complexion. “Two Gunz” was out of ammunition, but he did enough early.

Tua hurt Barrett in the 10th round, pinning him against the ropes. He raised his arms in delight to the crowd and thought it was in the bag. Barrett appeared done. The judges thought otherwise.

The 3000-strong, vocal crowd waited through the undercards expectantly and booed Barrett on arrival. Tua received a standing ovation. There was an airy, yet electric atmosphere about this belt. It was career-defining for both fighters. The winner would carry on; the twilight loser faced an uncertain future.

Tua admitted, from his heart, Barrett should have won their first fight in Atlantic City last year, which led you to believe he was motivated and would deliver. He did that, but left it too late.

He needed a statement, either a knockout or convincing point’s victory, to ripple the division of giants that has become stagnant. His last convincing performance was too long ago, against Shane Cameron in October, 2009. Ultimately the 38-year-old was chasing a second world title shot after his defeat to Lennox Lewis in 2000. This could have been a stepping stone. He will now struggle to gain another.

In matching records alone, Tua’s impressive 52-3-2 scorecard dwarfed Barrett’s 34-9-2 in both experience and class. But records often don’t make it into the ring. As was the case tonight.
Ad Feedback

New Zealand’s next heavyweight hope, 19-year-old amateur Joseph Parker, easily took care of Australian Nathan Mackay in a three round contest. Parker forced Mackay into two standing eight counts and spit his nose as he builds up to next month’s World Games in Azerbaijan, where he can qualify for next year’s London Olympics.