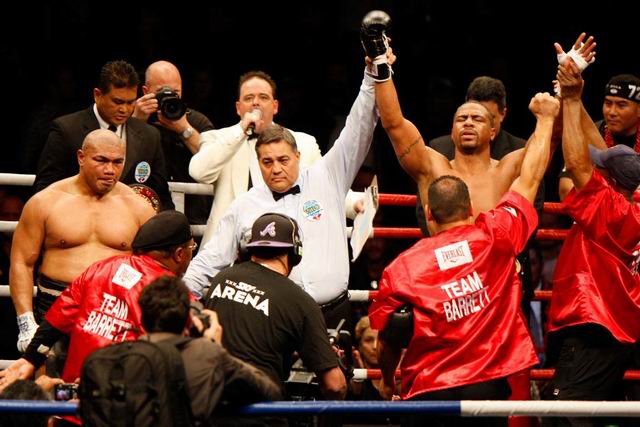 The fight was a rematch of their twelve round majority draw from last July in Atlantic City, which saw Tua get dropped for the first time in his career in the twelfth round.

Tua was very sluggish from the very start. Barrett had few issues with landing his punches. A cut opened up above Tua’s right eye in the third round. Tua began to pick up the action in the fourth.

Barrett was using his jab to control the action. Tua was making the mistake of resorting to a heavy amount of counter-punching. Tua landed a few good lefts in the sixth, but Barrett took them well and countered back.

Tua started landing his right hand in the seventh. Barrett switched his stance to avoid further punches. Barrett continued to use his jab to set up other punches. He was moving, making Tua follow and miss.

Tua started to rally again in the tenth round with big left hands there were landing. He hit Barrett with a big combination in the final minute and Barrett was in big trouble. Barrett stayed on the move with Tua not throwing anything. Instead of trying to finish Barrett off, Tua was playing to the crowd.

They were trading punches in the eleventh round. Barrett’s legs did not look steady and yet he was still outlanding Tua during exchanges. In the final ten seconds, Tua caught Barrett again and started working him over until the bell.

Tua, knowing that he was likely behind on the cards, was looking for one big shot in the twelfth. Barrett was holding and surviving. In the final minute, Tua landed a big combination of punches to send Barrett down for the first time in the fight. Barrett barely made it up and somehow Tua once again let him off the hook with thirty seconds left and he survived until the final bell.