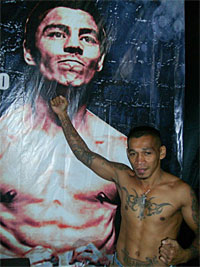 Interim WBO Asia Pacific bantamweight champion Angky Angkotta of Indonesia considers his loss to Jorge Arce on January 30, 2010 at Restaurante Arroyo in Mexico City to be controversial. “I abosorbed his strong punches, and he got exhausted in round seven, then he did the headbutt on purpose. I was injured on the temple, and the referee asked me to continue the bout, but the ring doctor insisted the referee to stop the fight,” Angkotta recalled from their first match which Arce won by technical decision. “I talked to Arce about a rematch, and he nodded. This is it!”

The Arce vs Angkotta rematch will take place in Mazatlán, Sinaloa, Mexico, on November 26 for Arce’s WBO bantamweight title. “I will knock him out this time, and the bomb will explode in Mexico,” promised Angkotta, who is nicknamed ‘Time Bomb.’ “I will bring the WBO belt home for my daughter’s (Chilla) birthday this month. I will also present it as a Christmas and New Year’s gift for my country.”

On the other hand, Angkotta’s promoter Raja Sapta Oktohari has promised him a big event in Indonesia if Angkotta can bring the world title belt home. He plans to feature the first world title tripleheader in Indonesia with Angkota together with other Indonesian stars Chris John and Daud Yordan.

“Wish me luck,” said Angkotta who will depart to Mexico tomorrow.