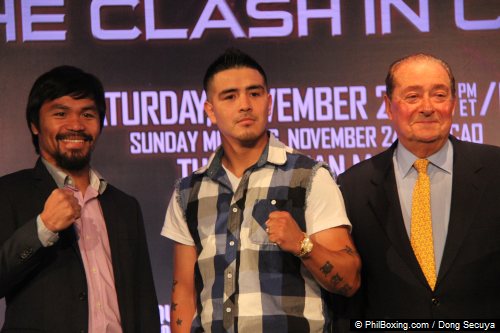 Arum Has Several Options in Store After Pacquiao-Rios Top Rank CEO Bob Arum is looking at several possible options for 2014, which he plans to explore after Manny Pacquiao (54-5-2, 38KOs) vs. Brandon Rios (31-1-1, 23KOs) is finished on November 23rd in Macau, China. This match is the final bout of Arum’s three fight welterweight series of 2013, which began when WBO champion Timothy Bradley won a twelve round split decision over Juan Manuel Marquez on October 12th, and then a week later Ruslan Provodnikov stopped Mike Alvarado in ten rounds to capture the WBO title at 140-pounds.

“This is the last of the three fights – Manny vs. Rios — and a lot of it depends on who the winner of this fight will be.  There are some fantastic matches that can be made next year with these fighters.  Manny has unfinished business with Tim Bradley and that might be a good option if he beats Rios.  If Rios wins, Ruslan Provodnikov or Bradley would be good opponents,” Arum said.

“Provodnikov versus Manny, if Manny wins, would be an intriguing kind of fight.  And of course there is a revenge match-up between Manny, if Manny wins, and Juan Manuel Márquez, which would be very sellable with the Mexican-Americans – that are still heavily in Marquez’s corner – that would like to see that fight again.  So let’s see how this fight goes on November 23rd and then I’m sure everyone will sit down and we’ll work out who Manny and Brandon will fight next.”