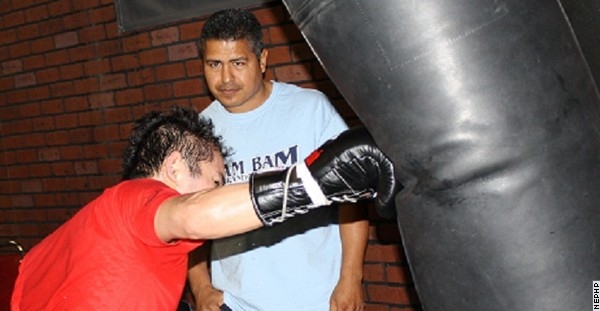 One of boxing’s brightest stars, Nonito Donaire, was again spotted training at the Top Rank Gym in Las Vegas, Nevada, ahead of his February 4th HBO-televised clash with former champion Wilfredo Vazquez Jr.

Donaire, the reigning WBO and WBC bantamweight champion, is moving up to the junior featherweight class to meet Vazquez for the vacant WBO belt, the same crown the Puerto Rican used to hold before his TKO loss to Jorge Arce in May of last year.

Under the watchful eye of his trainer Robert Garcia, Donaire sparred six spirited rounds with undefeated featherweight prospect Evgeny Gradovich. Originally hailing from Russia, Gradovich pressed Donaire and you could tell Nonito is still adjusting to the size difference with his move up in weight.

That being said, Donaire was equally effective with his blazing counters and didn’t back down from the challenge.

February 4th is inching closer and so too is Donaire beginning to become more well-rounded in camp.