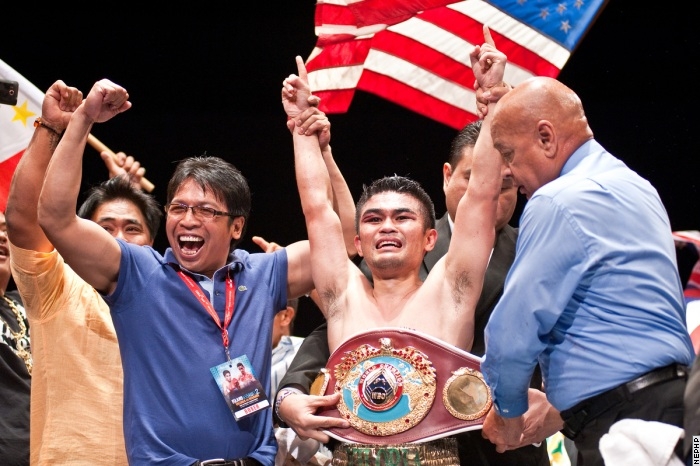 ALA works out Melindo-Viloria bout MILAN Melindo could earn his long overdue world title shot soon as ALA Promotions sent a letter to the World Boxing Organization (WBO) to require Brian Viloria to defend his crown.
ALA Promotions sent a letter to the WBO two weeks ago after Melindo’s impressive first round stoppage over former world champion Jesus Geles last June 3. ALA Promotions president Michael Aldeguer is optimistic that the WBO will order Viloria, the WBO flyweight champion, and No. 1 ranked flyweight Melindo to face each other in a mandatory world title fight within the year.
“Based on the policy, the mandatory fight is due. Plus the fact that Milan knocked out Geles, who was rated in the top 10 of the WBO, strengthens the position of Milan,” Aldeguer told Sun.Star Cebu.
An order by the WBO should dismiss the possibility of a bout between the 31-year-old Viloria and undefeated Nicaraguan star Roman Gonzalez.
Aldeguer is interested to promote the probable all-Filipino clash between Viloria and Melindo. However, ALA Promotions won’t start the negotiations until he receives the mandate from the WBO.
“We would like to promote the fight. It should be staged in Manila, either at the Araneta Coliseum or the MOA Arena,” he said. “We cannot move unless there is a go signal from the WBO,”
Although at this point nothing is definite, Aldeguer hopes that Melindo’s shot comes sooner than later.
“It’s difficult to say but we hope to make it happen this year. But it will all depend on the WBO or the plans of Team Viloria.” Viloria is 31-3 with 18 knockouts and has been riding on a five-fight winning streak, beating some of the elite names of his division in his last three fights like Giovani Segura, Julio Cesar Miranda and Omar Niño Romero.
Published in the Sun.Star Cebu newspaper on June 21, 2012.
By Edri K. Aznar