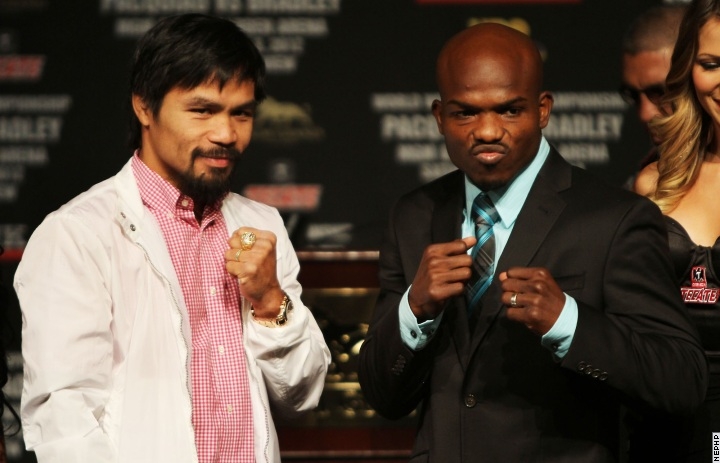 After the WBO’s findings, what now? Now that a World Boxing Organization panel of so-called independent judges chosen by the organization’s Championship Committee has declared Pacquiao as a convincing winner after a review of  the tape of the title fight at the MGM Grand Garden Arena in Las Vegas last June 9, what now?

Two of the three judges appointed by the Nevada State Athletic Commission — Cynthia Ross and Duane Ford turned in scorecards of 115-113 that helped Bradley win a split decision after the third judge CJ Roth had Pacquiao the winner 115-113.

Top Rank promoter Bob Arum, who handles both fighters, condemned the decision and branded the three judges, including CJ Roth who had Pacquiao the winner, “three blind mice” and requested the Nevada State Attorney General to investigate the circumstances surrounding the decision and the fight itself amidst unsubstantiated speculation that it was a “fix.”

Two prominent US senators joined the fray and called for the creation of a single national boxing commission that would oversee the various aspects of the sport.

Democratic Majority Floor Leader Harry Reid, a friend of Arum and someone who obviously is grateful for Pacquiao’s last minute endorsement at a campaign rally in Las Vegas in which he urged Filipino-Americans to support Reid, and Sen. John McCain, who like Reid boxed in his younger days, used the bizarre decision in the Pacquiao-Bradley fight to win support for new legislation.

The WBO review panel’s scorecards should clearly bolster their efforts while at the same time raising serious questions about how NSAC executive director Keith Kizer could initially, nonchalantly dismiss calls for an investigation into the incompetence of the judges if there is no evidence to prove something more sinister.  Kizer’s position is understandable although seriously flawed because he recommended the judges who were eventually chosen from a pool of six nominees to do the fight.

Kizer informed us “the judges want to come in (individually) and review the bout and I want to watch it with them” and adds that “a judge re-watching a fight is always helpful (whether there is controversy or not).” The question is, what next?

WBO president Francisco “Paco” Valcarcel had, a few days before the fight, proudly handed Pacquiao a  Diamond Ring as the “Fighter of the Decade” in what might be considered an effort to  try and match the rival World Boxing Council’s Don Jose Sulaiman putting the first Diamond Belt on the line which Pacquiao won with a rousing 12th round TKO of Miguel Cotto.

Valcarcel sent the review panel’s scorecards to Kizer and broke it down systematically, which demonstrated their wide differences with the official fight judges scorecards. He pointedly noted “the results speak for themselves.”

Apparently they don’t speak loud enough since Valcarcel, in the same breath stated,   “There is no question of our respect and high regard for the official judges. Their integrity is not in question. However, it was decided that a review of the bout should take place with a panel of five confidential judges mainly to maintain impartiality.”

We subscribe to the appreciation of integrity as the quality of wholeness which was totally missing in this case.

Even a cursory reading of the scorecards of the five review judges and those of Ford, Ross and Roth show that the fight, to use Arum’s own words in dismissing any thought of a rematch, ” was not even close.”

Review judge No. 4 (since their identities have been kept secret at least for the time being) had Pacquiao winning by the widest margin, 118-110, while Judges 3 and 5 scored it for Pacquiao 117-111. Judge No. 2 had Pacquiao winning 116-112 which was our unofficial scorecard when we covered the fight with respected boxing commentator/journalist Atty. Ed Tolentino for The Filipino Channel of the giant broadcast network  ABS-CBN.

Judge No.1 scored it the closest at 115-113 but still had Pacquiao the winner which matched the scorecard of Jerry Roth.

According to Arum, the investigation of the Nevada State Attorney General’s Office is being pursued as the Chief Investigator and the Deputy Chief Investigator visited him in his Las Vegas office on Wednesday. He said they  “questioned me about a lot of background things for over an hour.”

Arum revealed that they asked him whether he had any proof of criminality and he answered “None, absolutely none.”

This, taken together with the announced views of Valcarcel and Kizer point to a dead-end as far as unearthing any evidence of corruption or wrongdoing, which means there is no way the WBO or the NSAC will reverse the decision or even declare the fight a no decision which would enable Pacquiao to retain his belt.

Like all other efforts to right the wrongs in boxing, nothing is expected to come out of the posturing of the parties to a decision which we ourselves initially referred to as a high crime in Las Vegas where Sin City added one more sin to its list of wrongdoings.

The only glimmer of hope is that Senators Reid and McCain can muster enough support in the U.S. congress to get the much-needed reforms they seek and boxing badly needs, if it is to survive.

The only other alternative would be for Pacquiao to accept the realities of the sport in Las Vegas, return to the scene of the crime and exact vengeance not on Bradley because he had nothing to do with what happened, but to at least win by a knockout or TKO and deprive the judges of a chance to do more harm and send the three blind mice a telling message.