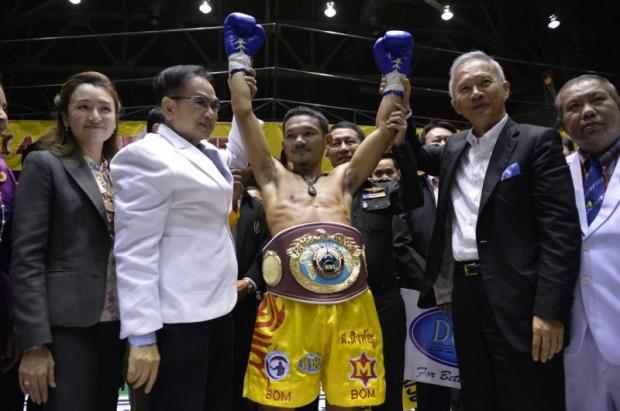 The fight, initially scheduled for Jan 16, will be held in Nakhon Ratchasima, about 260km northeast of Bangkok. It will be the first defense for the Thai champion after winning the title for the second time with a second-round knockout of Ryo Akaho of Japan.

“Everything has been confirmed. We have moved back the date because we needed more time to finalise our sponsorship deals,” said Pungluang’s manager Pariyakorn Rattanasuban. “The fight will be held in front of Thao Suranaree monument in Korat [Nakhon Ratchasima].”

She added that the 26-year-old Filipino, ranked fifth in the 118-pound division, will not be an easy opponent for Pungluang. Pabustan’s record stands at 26 wins with seven knockouts and two losses.

Pariyakorn said: “Pabustan is left-handed and is very patient. He has never been stopped in his career. It will be an interesting but tough fight for Pungluang.”

Pabustan is challenging for the crown for the first time, but Pungluang is determined to make his first title defence a success.

The Thai had lost to Paulus Ambunda in Namibia in March 2013, only five months after stopping AJ Banal of the Philippines to win the vacant title.

Pariyakorn added that the winner of the fight will face Marlon Tapales of the Philippines in the mandatory fight.

Tapales stopped Shohei Omori in the elimination fight in Japan on Dec 18. Earlier, the Filipono was tipped to meet Pungluang but was ordered to take on Omori first.

“Surely, if Pungluang wins this bout, he must face Tapales in a fight in Thailand,” Pariyakorn said.

http://www.bangkokpost.com/news/sports/810612/pungluang-to-face-pabustan. View our policies at http://goo.gl/9HgTd and http://goo.gl/ou6Ip