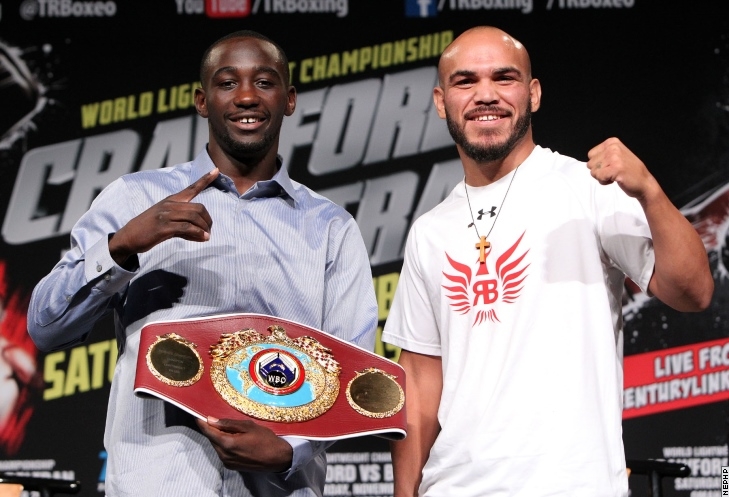 Crawford successfully defended his title on June 28, at the CenturyLink Center, knocking out previously undefeated world champion Yuriorkis Gamboa in front of an energized crowd. The fight, a candidate for Fight of the Year honors, was televised live on HBO®, and according to Nielsen Media Research, garnered an average audience of 1.208 million viewers to the live, first-time airing, making it the second most-watched fight of the year so far.  Crawford vs. Gamboa was the first world championship fight the city of Omaha had hosted in 42 years when Joe Frazier defended his World Heavyweight Championship crown against Ron Stander in 1972. “It’s an honor to fight in my hometown during the holiday season in front of my fans and family who will be traveling to Omaha,” said Crawford.  “It’s great that Top Rank and HBO are coming back into town to promote another show on one of the biggest weekends of the year.  Beltran feels I have something – a world title belt – which belongs to him.  He thought he beat Ricky Burns and I thought Beltran won too.  But he didn’t and I did. Beltran can fight. We know that.  I am going to fight him like a bad dog, fight fire with fire. Let’s see if he really has a will to win in Omaha. My will to win is off the charts. He won’t be coming straight at me the way he did against Ricky Burns.  My team and I are training hard to put on a good show for everyone. No one will be disappointed.” “Crawford has shown to be a talented fighter, someone I respect,” said Beltran.  “But I see this fight as an opportunity for me to achieve the recognition in the boxing world and the public’s eye.  This fight is Champion vs. Champion. It’s not about the belts. It’s about us.  Crawford is talented, has skill, but I have the ability to adapt and will be ready for what he brings.  The situation against Burns made me stronger, I felt the love of the crowd and all of their respect that night.  I feel blessed with my family and friends.  All of that will be with me when I fight Crawford in Omaha. I am the No.  2 fighter in the world. Crawford is No. 1. That is what this is all about.  I believe in me.  This is my moment.”

“This fight between Crawford and Beltran could very well be the fight of the year. The styles and skills of both fighters guarantee as much,” said Hall of Fame promoter Bob Arum.

“When Terence Crawford fought in front of his Omaha hometown crowd last June, the atmosphere produced one of the most spectacular fights of 2014 on HBO,” said Peter Nelson, vice president, programming, HBO Sports.  “The spotlight returns to the American heartland November 29, as the undefeated champ faces Ray Beltran, a challenger who has earned more opportunities than he’s been given and always gives the fans his all.”

“CenturyLink Center Omaha is honored to have the opportunity once again to host this world championship boxing event,” said Roger Dixon, President and CEO of the Metropolitan Entertainment & Convention Authority.  “The atmosphere was electric in June and we expect even more excitement this time around”

Crawford (24-0, 17 KOs), of Omaha, returns to the ring fresh from his dramatic and critically-acclaimed knockout victory of Gamboa.  Not only did Crawford retain his title, he also made himself a contender for Fighter of the Year.  He is only the second Nebraska native to be recognized as a boxing world champion.  Perry “Kid” Graves, from Rock Bluff, captured the welterweight crown, knocking out Johnny Alberts in Brooklyn, in 1914, according to the Omaha World-Herald.  After a short but impressive amateur career, which included victories over future world champions Danny Garcia, Mikey Garcia and one-time world title challenger Diego Magdaleno, Crawford made his professional debut on March 14, 2008 – a first-round knockout victory of Brian Cummings.  On March 1, 2014 – just 13 days short of the sixth anniversary of his pro debut, Crawford captured the WBO lightweight title, dethroning defending champion Ricky Burns on Burns’ home turf of Glasgow, Scotland. Scoring a powerful and unanimous decision, Burns put the boxing world on notice that with his virtuoso performance.  Crawford pulled out all stops in dismantling Burns as he rocked the defending champion throughout the fight, while switching back and forth between orthodox and southpaw stances.

Beltran (29-6-1, 17 KOs), a native of Los Mochis, Sinaloa, Mexico, who now lives in North Hollywood, Calif.,  is one of the lightweight division’s toughest and most experienced fighters.  A former NABF and USBA lightweight champion,  Beltran enters this fight riding a two-year five-bout winning streak, which includes a disputed draw against defending WBO lightweight champion hometown favorite Ricky Burns in Glasgow, Scotland last year.  In that fight, Beltran fractured Burns’ jaw in the first two rounds and dominated the fight, consistently landing the harder punches.  Beltran scored a knockdown in the eighth round and finished the fight strongly.  Ringside observers and television viewers alike screamed “home cooking!” when the fight was declared a draw.  Beyond his professional fight, Beltran has had the benefit of being a main sparring partner for Fighter of the Decade Manny Pacquiao for several years before becoming a top-rated contender in his own right.  In his last fight, on April 12,  he claimed the NABO lightweight title, winning  a 12-round unanimous decision against once-beaten Arash Usmanee on the undercard of the Pacquiao-Timothy Bradley Jr world welterweight championship rematch.